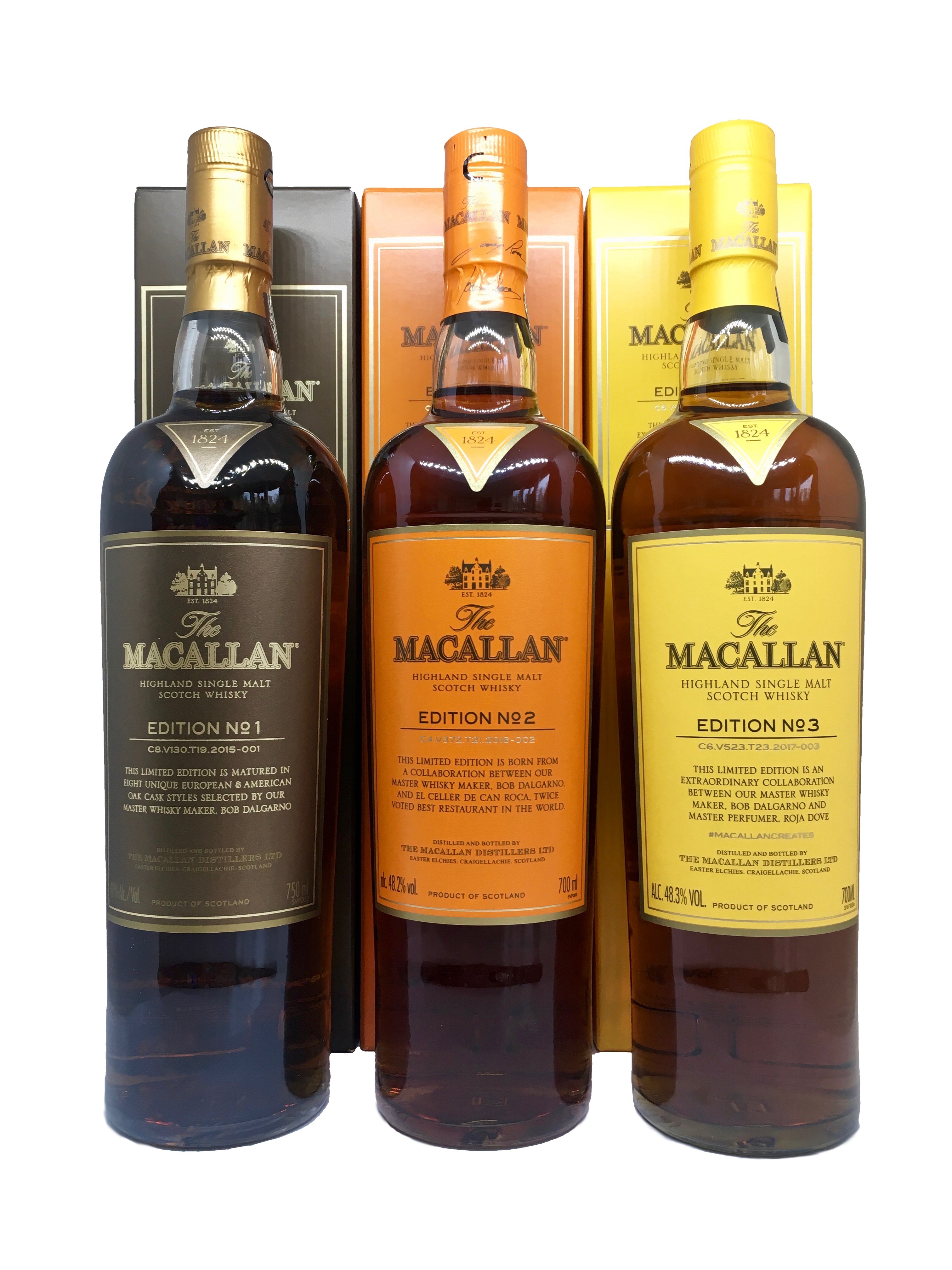 The Macallan will likely need no introduction to most readers; the Speyside giant stands alongside its neighbours Glenlivet and Glenfiddich when it comes to sales (measured either by volume or by value), making it one of the top-selling single malts in the world. To support this demand production is currently in the process of moving to a newly built site, with unconfirmed reports of a capacity of around 15 million litres per annum.

It seems somewhat at odds with this level of volume to speak of exclusivity, yet it bears testament to the power of marketing and branding — not to mention fancy crystal decanter bottles — that The Macallan has achieved iconic status in the “premium” whisky category and certain expressions can fetch headline-grabbing (and eye-watering!) prices at auction.

Branding and packaging aside, for the whisky drinker it’s what’s inside the bottle that counts and in recent times it would be difficult to argue that the quality of the liquid has matched the general increase in price across distillery expressions. The trickle-down effect has seen the perceived prestige of the auction-bound expressions translate into increased demand on the core range, and with that the whisky drinker is left digging ever deeper into their pockets.

Perhaps more significantly, the last number of years has seen considerable tinkering with the core range: the mid-2000s saw the addition of ex-bourbon maturation for the first time with the Fine Oak range, and more controversially still the 1824 Series saw age statements dropped in favour of colour-coding. Given that Macallan’s status grew originally in part from a reputation for quality across its core range, it is somewhat ironic that the end result of this sees the integrity of this core range being sacrificed.

Recent years have seen the introduction of a new series of limited releases: The Edition Series. The term limited here refers to a one-off release (of 200,000 bottles or so) each year – not exactly rare but not something you will necessarily see on shelves for years to come. Each year sees a new release in the series with an emphasis on a particular selection of casks and often chosen in collaboration with partners from outside the whisky industry (who nonetheless require a good nose in their own field). Although presented without an age statement, the level of detail specified on the type and proportion of casks that constitute the expression offer a level of transparency rarely seen – well done Macallan!

As of this article we have had three releases in The Edition Series, with a fourth due later this year. So far each release has been offered for around £80 from the usual sources. Having managed to acquire a bottle of each expression to sample side-by-side, I had the opportunity to not only consider the quality of the whisky but also the effect of the various cask selections and how each release fits into the range as a whole.

The Macallan Edition No.1

The inaugural expression in the series, Edition No.1 is the sole product of Master Whisky Maker Bob Dalgarno, a rather wide selection of 8 cask types (all ex-sherry) intended to showcase the capability of Macallan’s wood policy. The breakdown specifies previous fills, the cooperage, species of oak and size of cask:

Further information on the label tells us that the release is from a vatting of 130 casks (75 butts, 30 hogsheads and 25 puncheons) and is bottled at a healthy 48% ABV. There is no information on colouring or chill-filtration which would normally lead to the assumption that both are used but in Macallan’s case we can say no colour will have been added.

Nose: A very well-rounded and balanced nose begins with orange peel, cinnamon-dusted sultanas, sugared almonds and sponge cake. Given some time wood spice becomes more dominant with a lingering vanilla toffee. This is joined with some earthy spice including dark cocoa, which together with the orange peel evokes a dark chocolate orange.

Taste: A pleasantly mouth-coating and velvety mouthfeel deliver rich, succulent dried fruit; sultanas, prunes and blackcurrant jam. This is balanced nicely with a nuttiness, toasted walnuts in particular. The second half sees warm baking spice with vanilla and cinnamon which leads to the oak further dominating towards the finish. Unreduced, the oak threatens to become overly tannic at this point but a drop of water rein this in and deliver a sweetness to the nutty side of the palate in the form of marzipan.

This is a fantastic example of whisky composition: layers of character and several dimensions that never stray too far from a central theme. Exactly the sort of whisky that would work very well as the flagship of a core range.

The Macallan Edition No.2

The second release of the series is a collaboration with the Roca brothers – Joan Josep and Jordi – founders of highly acclaimed restaurant El Celler de Can Roca, a trio of skill and experience when it comes to all things flavour. The parallels may not be too direct when it comes to creating flavour in the kitchen versus the dunnage warehouse, so this whisky has the potential to be a fresh perspective on cask selection and blending. Or for the cynical, a nice storyline for another new release in lieu of an age statement or other details. This is perhaps an unfair assertion given that once again we are privy to additional information on the composition of the vatting:

This time we are not given the size of casks from each pick — perhaps there was a mixture? — but the final result is a vatting of 194 butts, 78 hogsheads and 100 puncheons, bottled at 48.2% ABV.

Nose: Initially this is less “bright” and fruity than the first Edition; the focus being on spice and dark sweetness: crystallised ginger, tiramisu and espresso with brown sugar. Given some time things brighten up with a spray of orange oil and marmalade on a sponge cake fresh from the oven.

Taste: A consistent palate reflects the nose with the same theme of sweetness and spice: muscovado sugar, coffee cake with icing against a constant background note of ginger. Balance is provided again the form of a refreshing burst of orange oil and some stone fruit.

Not a significant departure from the first release, Edition No.2 feels like the more feisty sibling with the rich sweetness and spice being given more of a free rein – an explosion of flavour!

The Macallan Edition No.3

2017’s addition to the range is a collaboration with renowned Master Perfumer and fragrance specialist Roja Dove. With unparalleled nosing ability, the title Master Perfumer is bestowed only on those who have produced signatures considered benchmarks in the perfume industry. Certainly the sort of credentials that promise to be a dab hand when it comes to cask selection! This Edition sees a slight departure from previous releases with the addition of ex-bourbon casks:

A vatting of 167 hogsheads, 162 butts, 157 puncheons and 37 barrels produced a whisky bottled at 48.3% ABV. The eagle-eyed will have spotted a trend emerging with the bottle strength, although I now wonder why Edition No.1 wasn’t bottled 0.1% stronger!

Nose: Noticeably lighter than the previous Editions with sweet and floral notes dominating initially: warm vanilla fudge and heather honey, with orange blossom tying us back to the previous releases. On this fruitier side there is a very gentle lightly-poached pear with just a smattering of wood spice.

Taste: A pleasant creamy mouthfeel keeps the palate from feeling too “light” initially, rounding out the dominant notes of candied orange, floral honey and vanilla. The midpalate sees richer notes of toffee and all butter flapjacks appear, and towards the back of the palate oak-led spice takes the lead.

This whisky is certainly more of a departure from the first two releases in the series. It may seem like auto-suggestion but the Master Perfumer has certainly selected lighter, more floral whiskies to form this expression, leading to a more subtle and gentle Macallan.

For me, this range of whisky has been a huge hit from Macallan and is the best affordable whisky to come out of Easter Elchies in the last few years. For the purpose of this article I wanted to rank the three expressions in order of preference but in all honesty my favourite largely depends on my mood: Edition No.1 is fantastically balanced and well-engineered, No.2 is all about big flavours and Edition No.3 is the more delicate side of Macallan.

Given what we have seen so far, I look forward to Edition No.4 later in 2018!