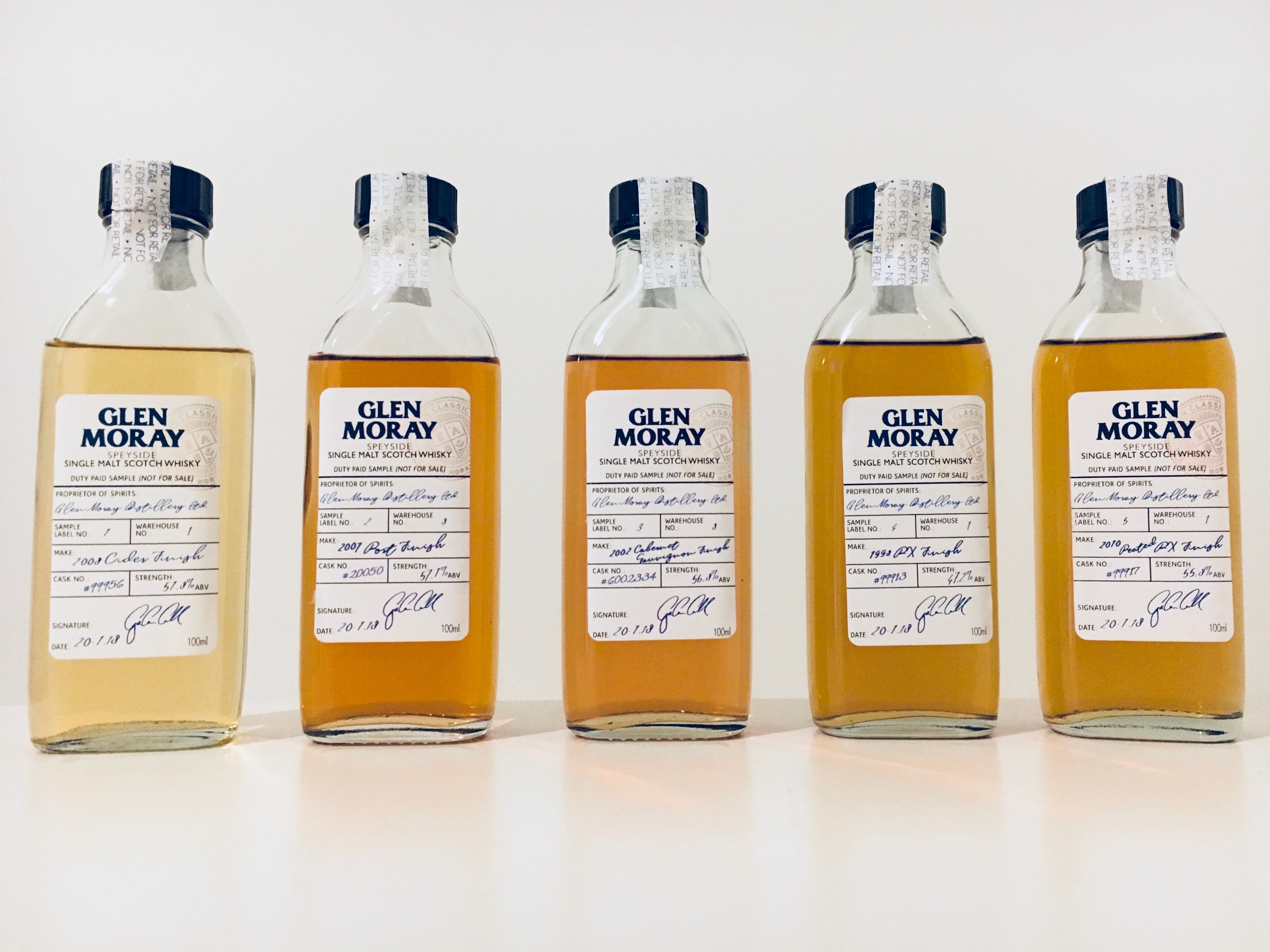 To the casual observer, Glen Moray is known primarily as being a source of value whisky. Proudly occupying the affordable end of supermarket shelves, the Classic range offers a commendable level of variety for around £20-£30. Celebrating its 120th anniversary last year, Glen Moray was founded in 1897 and aside from a silent period between 1910 and 1923 has been producing whisky throughout for relative few owners under the watchful eye of only five master distillers in this time period – a testament to the continuity of the brand.

However, to consider Glen Moray solely as producers of value whisky would be a disservice; while large parts of the industry embraced the cask finish a few years ago Glen Moray has acted as something of a pioneer in ex-wine cask maturation, a case in point being an ex-Chardonnay release dating back to the late 1990’s. This penchant for wine cask experimentation has continued to this day, evident in the availability of various maturations and finishes throughout Glen Moray’s range of whisky.

Master Distiller Graham Coull revels in this role, keeping an inventory of projects in the warehouse. These experiments consider a number of variables not limited to cask type but also aspects such as finish length and even cask fill strength. Additionally, Graham is responsible for the first run of peated spirit at Glen Moray in 2010, following on from similar introductions during his time at Balvenie and Glenfiddich.

In recent years the ideal outlet has been found to gather feedback from these experimentations: like many distilleries who wish to offer tourists something unique, the visitor’s centre has a Bottle Your Own cask on rotation. Selected from among Graham’s projects these expressions tend to be well-received and are always reasonably priced.

As part of an evening arranged by The Whisky Wire I was afforded the opportunity to go one better; not only was the current visitor’s centre cask available to sample but also the product of 4 other experiments, no doubt some future Bottle Your Own expressions among them.

Certainly one of the more unusual finishes, Glen Moray is no stranger to a cider cask finish having previously selected one for the visitor’s centre (which proved rather popular). A partnership with Thistly Cross Cider sees Glen Moray casks used twice for cider maturation before being sent back. Finding that this finish works best with younger whisky, this sample is 9 years and 9 months old having spent its final 2 years in the cider cask.

Nose: Given knowledge of the finishing cask yeasty apple is immediately detectable. There are also lots of syrupy sweet notes, oak and baking spice. Some shortcrust pastry arrives to complete the apple pie theme.

Taste: Chocolate lime sweets lead on a fairly sharp attack. Towards the mid-palate there is a light sherbet note alongside plenty of oak and earthy notes. A drop of water dissipates the sherbet notes and introduces a richer note of honey & lemon lockets.

Finish: The earthy notes from the palate turn sweeter towards root spice.

A curious dram this one – the knowledge that it is a cider cask finish explains so much of what is going on here, but to taste it blind would surely be a real head-spinner. Interesting stuff!

The current Bottle Your Own cask at the distillery, this whisky is 10 years old, having spent the first six years of its life in ex-bourbon casks before being transferred to ex-Tawny Port casks for the remainder. Four years is certainly stretching the definition of a “finish” and in my mind is well into double maturation territory, but it’s worth keeping in mind that there are no strict definitions for these terms.

Nose: An altogether different whisky to the first dram yet with familiar Glen Moray character, this has a syrupy stewed prunes, maraschino cherries and a rich malty note. In the background there’s a very faint hint of menthol. The nose develops beautifully with time bringing super-intense raisins and dried raspberry-laced dark chocolate.

Taste: A pleasant mouthfeel brings dried fruit initially, before being joined by an astringent earthy spice and a touch of ginger. The palate becomes richer on the mid-palate with lots of cacao nibs and chocolate sponge with a cherry on top. The reduced palate unleashes more wood spice and ginger.

An intensely more-ish whisky, something to pair with a rich dessert or as a digestif.

At just over 15 years old, this whisky spent the final 9 months of its maturation in Cabernet Sauvignon casks from Bordeaux. It may come as a surprise to learn that this is Glen Moray’s first foray into Cabernet Sauvignon finishing.

Nose: A much lighter nose following the port finish, the trademark Glen Moray custard sweetness is joined by a grassy/grape-y character alongside some gentle wood spice. The nose then progresses to more perfumed notes, brining pomelo and strawberry blossom.

Taste: Sweetness and spice is joined by ripe strawberry and then darker summer berries such as blackcurrant. The mid-palate brings an added dimension of chocolate and ginger. A drop of water really makes this dram, bringing out the fruity sweetness of jam roly-polies.

Finish: A touch of honey and lemon is joined by earthy/oaky notes.

I felt that this dram took quite some time to open up, with a couple of drops of water required to coax it out of its shell. Who says there can’t be subtlety in wine cask maturation?

A 19 year-old whisky which spent its final 3 years and 4 months in an ex-PX sherry butt. Interestingly, the spirit was reduced to 50% ABV before filling to the secondary cask. In theory this could mean picking up character more quickly from the sherry butt, but the proof of the whisky is in the tasting!

Nose: Dried fruit and a very pleasant dunnage-y and malty aspect. Top notes of orange zest (or perhaps pink grapefruit?), a definite hint of earl grey tea with some polish in the background. Given some time the light citrus and tea make way for a creamy nuttiness, primarily walnuts. The reduced nose brings some additional spice.

Taste: The palate is all about the PX – sticky medjool dates, plenty of rich dried fruit with toasted mixed nuts and a touch of fresh roasted coffee lingering in the background. A drop of water enhances the fruity side of the palate.

Interestingly this whisky was not an out-and-out sherry bomb; layers of the classic Glen Moray sweetness were still present. Given the particularly long finishing period of over 3 years it would seem that the reduced fill strength has gone some way to temper the potential aggressiveness of the cask.

This year was distilled in the year that saw the first distillation of peated spirit at Glen Moray. A relative youngster (no doubt with the intention to allow the peat to shine), this whisky is just shy of 7 years old with its final 3 years and 4 months (almost half its life!) spent in an ex-PX sherry butt.

Nose: A very direct nose brings smoked bacon on a brioche bun, the combination of smoke and rich dried fruit give a real savoury/meaty quality to this dram. There is plenty of tangy fruit and spice (BBQ sauce) in accompaniment.

Taste: A dry smoke and engine oil are initially present before the tangy fruit and spice make a return on the mid-palate, albeit not with the same intensity of the nose. In the background is a malt sweetness providing depth. A drop of water brings out some charcoal grilled beef.

Finish: Consistent to the end, the finish sees grilled meat and BBQ sauce, with a slight balsamic edge.

A very fun dram and quite different from the peated cask Glen Morays of the past. Certainly a new dimension to explore and another string to Glen Moray’s bow in the future.

This tasting was a rather enjoyable opportunity to explore the more experimental side to Glen Moray, and served as an insight into the more ad-hoc (and fun!) side of the Master Distiller’s role. Many thanks to Steve Rush for arranging this Tweet Tasting, to Fay and Graham Coull, Iain Allan and Emma Ware for providing such generous samples and to my fellow Tweet Tasters for a splendid evening’s dramming.