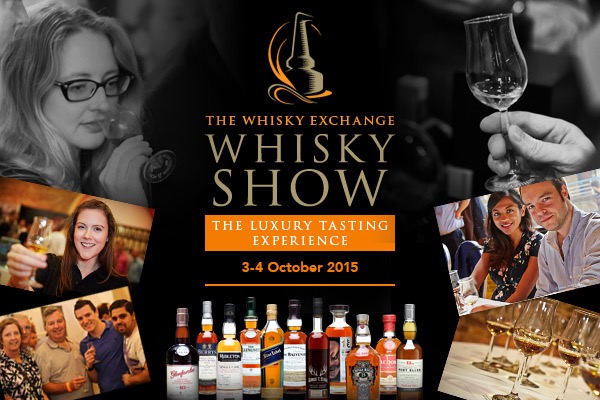 The Whisky Exchange Whisky Show returned for 2015 in a new, bigger venue: The iconic Old Billingsgate on the north side of London Bridge – once the world’s largest fish market – played host to arguably the world’s biggest whisky festival.

Taking place over 3 days (including a trade/press day), TWE Whisky Show features over 100 exhibitors featuring around 600 whiskies, entertaining several hundred enthusiasts for 7 hours of tasting each day. In addition to all of this is a variety of masterclasses where attendees can be guided through unique tastings by legends of the whisky industry, and an on-site shop where many of the show’s bottlings are available for purchase.

The Whisky Show is billed as a premium event with a relaxed atmosphere, which given the numbers involved is quite some feat! Arriving a good half hour before opening, I was surprised at the sheer volume of drammers who had the same idea and were already anticipating the wonders that awaited them. Luckily Old Billingsgate is a large enough venue that can easily accommodate the numbers present while providing ample room to find a quiet spot for a chat.

On entering, I was quite pleased to be given a large-stemmed copita glass – whilst I do love the ubiquitous Glencairn glass I find myself with so many these days that a change is always welcome! Along with the usual show guide was a meal ticket – a two-course lunch included in the entry fee – and a dream dram token.

Dream drams are one of the major selling points of the event – with one included in the entry fee and more available at £10 each, these tokens can be redeemed against a range of (ultra) premium whiskies. This year’s dream drams included bottlings such as a 21 year-old Rosebank, a 1980 Karuizawa, the new 25 year-old Littlemill Private Cellar release, a 35 year-old Glengoyne and many more.

Not limited to Scotch, the event is a showcase of whiskies from around the world, and with this in mind I spent the first part of the show browsing the wide selection of American bourbons, ryes and other whiskies on offer. Here are some of the highlights:

1792 Small Batch bourbon – banana and other sweet tropical fruit on the nose, rounded with some gentle spice – an absolute steal at just under £60 a bottle, this makes a fantastic drinking whiskey.

Smooth Ambler Contradiction – a blend of two whiskies made to different mash bills: one a young wheater and the other an older rye-heavy bourbon. The two combine to balance beautifully, with the older whisky helping accentuate the soft notes of the young wheat, and the younger whiskey ensuring the rye is not overly dominant.

High West Campfire – A rather interesting concept of a sweet, fruity-spicy bourbon married with a peated Scotch. I believe Caol Ila was the Scotch used here, and the drier smoke worked well with the fruity sweetness of the bourbon in a way where a more medicinal peat may have clashed. Good stuff!

Dad’s Hat – this was one of the smaller stands at the show, which is ideal as it essentially means you end up talking to the distiller themself and can gain great insight into their work, back-story and motivations. It was an absolute pleasure to speak with Herman, I will definitely be calling on the distillery next time I’m in Philadelphia.

After a break for a soft drink and a bite to eat, it was time to re-enter the fray, but not before bumping into author of the 101 Whiskies (and now 101 Gins) series of books Ian Buxton. It was a delight to meet and chat with Ian, whose books I highly recommend as both entertaining reading and an excuse to expand/revisit some of the less explored corners of your whisky world.

There was a tremendous range of fantastic whisky on offer – before the show I had highlighted some of my “must try” drams, which I didn’t quite make it through on the day. Some of the highlights were:

Berry Bros Glen Grant 1995 – Bottled after 18 years, initial notes of melon and stone fruit with an added richness on the palate. Beautifully rounded and slightly sweet.

Douglas Laing Auchentoshan 14yo Old Particular  – Being triple-distilled, Auchentoshans are typically quite light and subtle. This was not a major break from this theme, but the nose and palate definitely seemed “bigger” than the standard bottlings. Crisp, floral with some grassy herbal notes. The palate introduces some malt and leaves a sweet, zesty finish.

Wemyss Malts – As well as the usual excellent offerings from Wemyss Malts, I was particularly excited to try Kiln Embers, the new more-peated-than-Peat-Chimney blended malt. The lingering smoke did a great job of balancing savoury notes (cured bacon) with zesty and floral elements (lemon peel, heather honey). In addition I had the opportunity to try new make spirit from Wemyss’ new distillery Kingsbarns – the spirit certainly showed good potential with soft pear and cereal notes.

Rosebank 21 True Love Rose Series – My dream dram for the day, this TWE exclusive bottling was an absolute treat: summer meadows, perfume and floral honey were all present with an underlying nuttiness. A dram you could easily spend all evening with!

After all this there were still a fair number of bottlings I would like to have sampled but didn’t get around to – it is amazing how quickly 7 hours can fly past when there is so much on offer! I’d certainly like to return for the full weekend next year; the additional time would make it much easier to take in some of the masterclasses and spend a bit more time with the fantastically knowledgeable people who make TWE Whisky Show what it is.