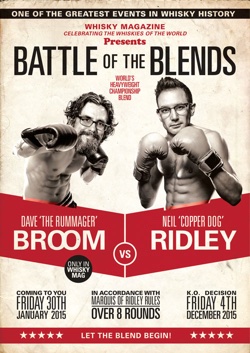 Readers of Whisky Magazine will no doubt be aware of Battle of the Blends – an exercise of blending played out over 6 issues between two regular writers Dave Broom and Neil Ridley. The idea was to create a blended whisky month-by-month from readily available bottlings and have it mature in a small cask as it progresses. Now this process has completed, I have been lucky enough to have obtained a sample of each blend to judge which in my opinion is the worthy winner.

Back in January the two contestants were given 20 litre first-fill American oak casks. These were initially seasoned to their own requirements: Dave opting for rum and Neil going with a blend of sherry (mostly Oloroso with some Manzanilla, Palo Cortado and a touch of PX).

The first whisky to go into each cask was a litre of the highland malt Clynelish 14. After this, Dave and Neil followed their own path guided by certain restrictions:

Of course, this was not a regular blending process; blends are not typically created one whisky at a time, especially with the first litre or so sitting in an almost-empty cask for a month by itself! This was more a process of education and entertainment, and it was indeed quite insightful to read updates each month from Dave and Neil as they discovered if their efforts had produced the desired effect, and where they had to realign their intentions when the unexpected occurred.

Both contestants entered the process with a vision for what they would like their blend to be: Dave was looking to create a blend medium-bodied, low in smoke, relatively sweet and elegant. Not wanting to get lost in a confusion of ideas, Neil planned to create a blend simple in nature but with its own distinctive personality.

After following their journey over 6 rounds, the two blends contain the following whiskies:

At the end of this process, some readers have been lucky enough to snag a sample of the two creations, with a view to voting for the blend which we deem most worthy. There are no set criteria for how we draw this conclusion – character, complexity and balance can be weighted however we wish – along with good old subjective personal preference. So over the weekend I cleansed my palate, filled two glasses with the mystery amber liquids and carried out this solemn duty. If you are reading this before 30th September you may be able to join in too – see Master of Malt for details.

My initial impression was that Blend A was noticeably darker in colour than Blend B. With this in mind, and expecting Blend A to therefore be a “bigger” dram, I decided to nose Blend B first. It’s worth mentioning at this point that auto-suggestion was kicking in – the graphic showing the two blends’ contents in Whisky Magazine had Neil’s containing a greater proportion of darker whiskies – perhaps Blend A is Neil’s?

Trying to put these thoughts out of my mind, I lifted the watch glasses and went to work.

Colour: An orange-gold sunset
Nose: An immediate zestiness, plenty of fragrance and tropical notes. Some smoke appears, integrating nicely to give balance and never overwhelming. Given some time in the air, a touch of oak begins to present itself, giving an impression of milk chocolate in wax paper. A touch of water keeps the nose pleasantly herbal and perfumey.
Taste: I was impressed with the weight of the palate; a bigger mouthfeel than I had anticipated. In a manner consistent with the nose, this blend leads the palate on a journey starting with lighter citrus fruit before a waft of smoke leads you towards some rich sweeter elements. Lemon curd shortbread. Plenty of fragrance, a late summer meadow.
Finish: Some oak makes an appearance on the finish to dry things out, but perhaps a little too soon?

Colour: Radiant copper
Nose: Fruity with light winey sherry notes. There is plenty of rich malt to hold things together and carry the nose to lots of toffee, treacle and other sweet things. There is lots of woody spice to be had too – vanilla and cinnamon. My mind started wandering towards banana at this point, most likely led by the knowledge of a rum seasoned cask used by one of the blends! Water dried the nose noticeably – bringing wax crayons and pencil cases, toning down the sweet toffee notes and emphasising that this blend has balance.
Taste: This one has a lovely big palate, lots of toffee and burnt caramel, a rich smoke begins to rise towards the finish but not enough to distract from the overall character. Some floral elements are there if you look for them – heather honey. I initially thought that these elements were being overwhelmed but perhaps having too many distinct aspects “side-by-side” in a blend wouldn’t work? Tricky stuff this blending business!
Finish: A delightful concoction of sweetness and smoke.

It was a pleasure to sit down and spend some time with these blends – both Dave and Neil can be proud of their creations. Of course “real” blenders have many additional challenges to face down, not least year-on-year consistency in the face of every changing stock availability. However, Dave and Neil have done a great job creating profiles that were interesting and enjoyable – key tenets of any whisky!

Both blends displayed a healthy complexity – initially I had Blend B ahead on this front but the floral elements hiding in the nose of Blend A were enough to make this too close to call.

Of the two blends, Blend B was the more balanced – there were light top-notes of citrus, a rich mid body, some sweetness and a healthy waft of smoke.

Whereas Blend B excelled in showing off these different aspects, Blend A was a wonderful showcase of rich sweet notes – definite and unmistakable personality.

It was a tough call, but in my opinion a blend lives and thrives by its character; and with this in mind, after going the full set of rounds, it is Blend A whose arm is held aloft by the referee.

I’d like to thank Whisky Magazine for this enthralling series, Dave Broom and Neil Ridley for their excellent craft in creating the blends, and Master of Malt for creating the samples.