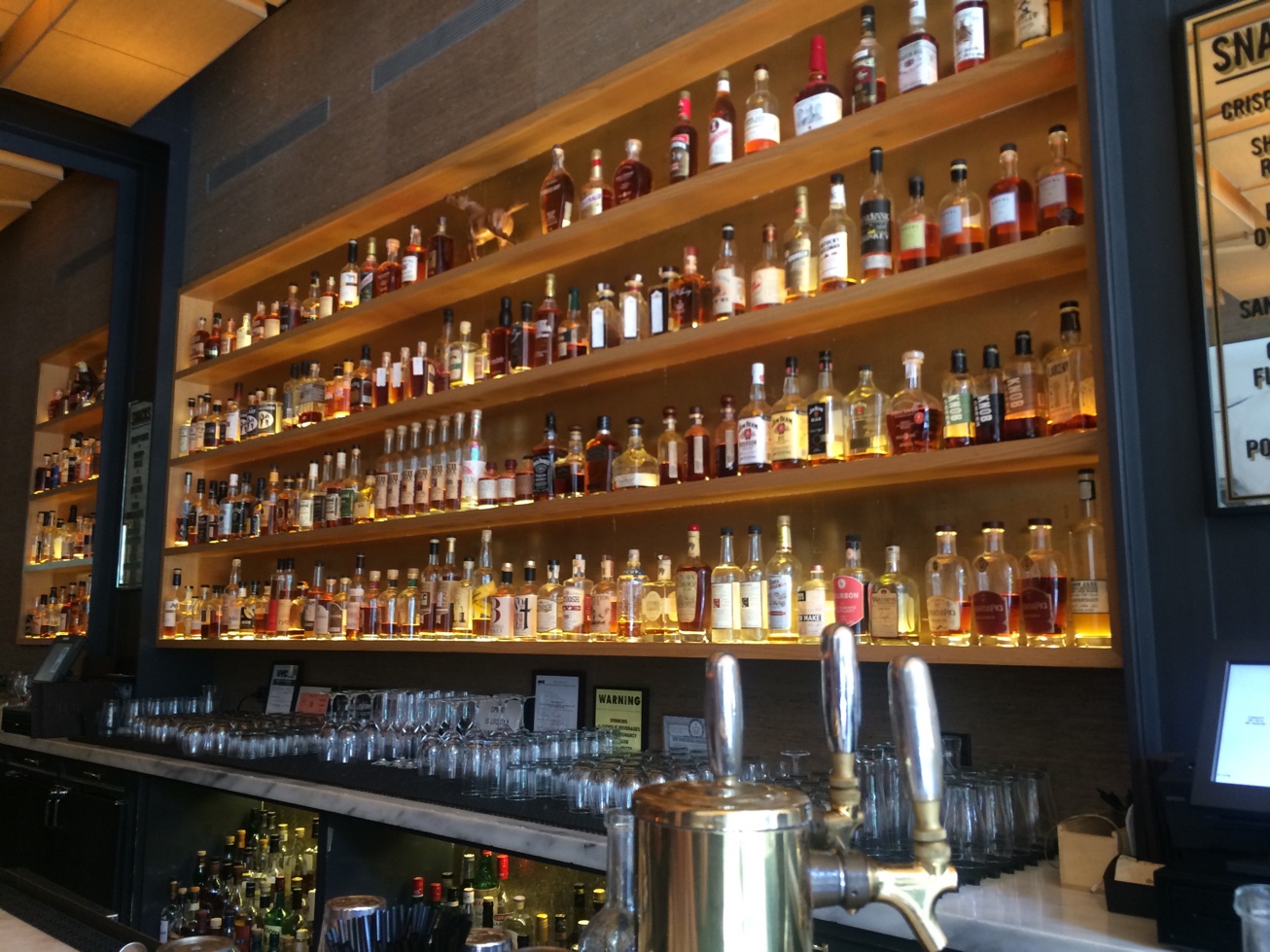 After stumbling across this Southern-styled American Whiskey bar restaurant last year, it is fast becoming a must-visit whenever I’m in New York. Named for the Kentucky port town from which Bourbon first left the state, the bar pays homage in subtle ways such as the horse artwork on one side and the ceiling light installation reminiscent of corn fields in the region.
Maysville offers a vast range of American whiskeys of all styles; including many bottlings that may not be familiar in addition to the usual favourites. However this is not jut a bar with a thrown-together food menu for peckish drinkers; the Southern-inspired food menu is well thought out and impressive.

Having dropped by on a Sunday afternoon, I decided to indulge in the brunch offering before embarking on a tasting. This was kicked off with a Maysville twist on a brunch classic; a bourbon Bloody Mary which balances umami flavours and a kick of spice with a sweet, drying bourbon. This was closely followed by a fantastically huge lemon-glazed doughnut which for a brief moment — between scoffed mouthfuls — made me fear for the room I would have left for the main course!

However these fears proved unfounded on the arrival of the crispy grits with caramelised onion, collard greens and mornay sauce. The grits were fantastic, a wonderful textured balance of crisp bites and an almost pudding-like creaminess. Suitably fuelled, it was time to explore the vast array of American whiskey available on the impressive display behind the bar. The gentlemen behind the bar are friendly, knowledgable and passionate about the whiskey on offer and were on hand to help select an interesting range from across the country.

Widow Jane is a small craft distillery operating out of Red Hook in Brooklyn, however it is named for its mineral-rich water source in the Widow Jane mine upstate in Rosendale. Its rye whiskey has been matured in its own ex-bourbon barrels (rather small casks at around 40 litres) with new oak and applewood staves added. Dusty straw coloured, the nose was estery with some soft fruit lifted by furniture and new carpets. The palate is big on rye spice and orange peel. A few drops of water enhance the tart, tangy citrus notes.

Established in Palisade, Colorado in 2005, Peach Street Distillers is a diverse brewer/distiller offering a range of fruit brandies, grappa, tequila and bourbon. Thankfully Peach Street seem to be transparent in their operation and produce their own distillate, contrary to some “craft distillers” popping up in the US in recent times. The Colorado Straight Bourbon uses a mashbill of 60% corn (sourced from nearby Olathe), 20% barley and 20% rye. The spirit is aged for 2 years in new American oak. This is a nicely sweet spicy bourbon with lots of Christmas spices, mince pies and a touch of wood sap. This theme continues on the palate with spiced dried fruit and maple syrup. Water brings out some peach and caramelised sugar.

The brainchild of Maysville owner Sean Josephs, Pinhook Bourbon produces Kentucky Bourbon in small batches, with each release named after a racehorse from Bourbon Lane Stable in Versailles (Kentucky) — the label goes as far as to list the horse’s information, and their website lists its race career statistics! The Hashtag Bourbon release is named for a 16 hands bay colt foaled on 26th March 2012. The whisky is a dark golden syrup colour and presents a nice dry nose with cocoa powder and spice with some cherry bark. The palate is largely consistent with the nose with the addition of some vanilla. Water brings out egg custard tarts and some pear notes. The finish is satisfyingly complex, the various characters from the nose making an appearance with the addition of a slight hint of wintergreen.

Copper Fox is a Virginia distillery which has been innovating by combining a slant on Scotch whisky tradition with process borrowed from the wine industry. This rye spirit contains 33% malted barley smoked with a mix of apple and cherry wood and has been matured in ex-bourbon casks with the addition of apple and oak chips. This gives the spirit an interesting savoury, smoky note not normally associated with rye whiskey. Salted porridge and katsuobushi joined the more familiar dry spiciness of the rye. The palate offers soft fruit mixed with savoury pepper notes and a hint of smoke in the background

When you think of classic American whiskey country, Vermont is hardly likely to be high on your list. However, this is where Raj Bhakta has built WhistlePig, bringing Dave Pickerell (of Marker’s Mark fame) on board. The plot thickens on discovering that WhistlePig only obtained permission to distill in the state of Vermont in 2014, and their own locally distilled spirit is due to start flowing any day now (as of August 2015). So, what we have currently is a Canadian-distilled (by Alberta Premium) and partially Vermont-aged rye whiskey. Not that this should take the shine off of what is a fantastic whiskey. The nose is soft and gentle, with poached fruit balanced with ginger, cinnamon and bergamot. The palate is well-rounded, balancing autumnal fruit beautifully with burnt sugar and warm spice.