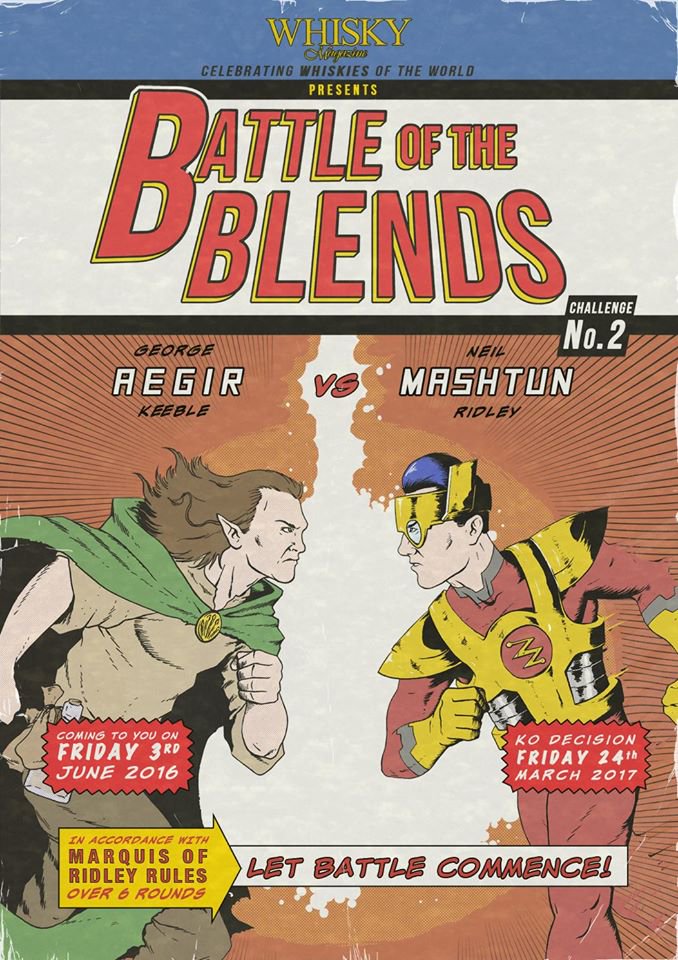 Following on from 2015’s inaugural Battle of the Blends contest, Whisky Magazine has once again pitted two seasoned drammers against each other in an “epic battle” to see who can create the superior blend, with the winner decided by Whisky Magazine readers and industry insiders. This year Master of Malt have got on board to help distribution of the blend samples to a wider audience, with the intention of obtaining a more cosmopolitan result. In a winner-stays-on format, we see the return of Neil General Mashtun Ridley to take on the new challenger George Aegir Keeble, manager of the Soho Whisky Club.

The challenge follows the same format as previously: both contestants are given a 20 litre American Oak cask which has been initially rinsed with high-strength neutral spirit. The contestants then select an alcohol of their choice (e.g. sherry, port, rum, etc.) to season the cask before adding whiskies at regular intervals following a few simple rules:

To start, both casks were filled with a litre of Clynelish 14 Year Old – an ever-popular blenders’ choice. After this, the contestants were on their own!

A few months later, the casks were filled and the blends ready for sampling. After Neil had seasoned his cask with port and George opted for Olorosso sherry, the component whiskies of each blend on conclusion were as follows:

I was rather excited when the Drinks by the Dram package arrived with the two mystery blends, labelled simply “A” and “B”. As before, these are to be judged in an open format using whichever criteria the critic deems important and relevant.

For a blend I tend to look for a distinct personality or theme to the whisky, with additional layers of complexity carefully balanced to provide continued interest without overwhelming the overall character of the spirit. As I poured the whisky it became apparent that despite their different makeup both blends have an incredibly similar hue – perhaps a blessing in that my mind will not wander into second-guessing whose blend is whose before I have lifted the glasses to my nose!

Nose: Concentrated notes of salted hazelnuts initially, followed by lots of dried fruit with a top note of vanilla fudge keeping things nicely balanced. There is damp smoke inside a dunnage warehouse also present which provides an interesting extra dimension to what is a rather more-ish nose. The addition of water brings soft citrus notes to bear.
Taste: A cacophony of rich wine-influenced notes bringing dried fruit and plenty of hazelnuts. There is a hint of coastal smoke in the background providing support, and a pervasive salty-sweetness of salt-caramel.
Finish: Pleasant toasted nuts and a gentle maritime smoke.

Nose: Initially lighter than expected with a gentle sweetness and red berry fruit alongside some citrus. This develops into richer notes of dried fruit and glacé cherries in a Dundee cake. Behind this is pistachio and Indian barfi sweets.
Taste: A lovely mouthfeel and texture to this blend, the palate commences with some creamy sweetness before opening up with some bright fruit: lemon bon-bons and pink shrimp sweets. Behind this is a faint earthy tobacco note.
Finish: A fairly abrupt finish dries nicely to allow the tobacco leaf notes to shine.

Once again the standard for Battle of the Blends has been satisfyingly high; both Neil and George can give themselves a pat on the back for the skill they have shown in producing these blends – particularly as self-confessed blending amateurs!

Both blends displayed a healthy level of complexity – Blend A perhaps slightly less so in comparison to Blend B which had a few different dimensions on both the nose and palate. The same can be said in terms of balance; Blend A was quite heavily-weighted in the rich nutty/dried fruit direction whereas Blend B was more neutral with branches in various directions. However, a blend lives and dies by its character and in this category Blend A was a clear winner: it had a very definite personality and (particularly with the higher ABV) was not afraid to show this off.

Personally it is this focus which impressed me most, and with this in mind my vote was cast for Blend A. Congratulations to whomever this blend belongs! My vote will be tallied among the many others and the winner announced at Whisky Live London on Friday 31st March.

I’d like to thank Whisky Magazine for another enthralling series, Neil Ridley and George Keeble for their excellent craft in creating the blends, and Drinks by the Dram & Master of Malt for creating and distributing the samples.