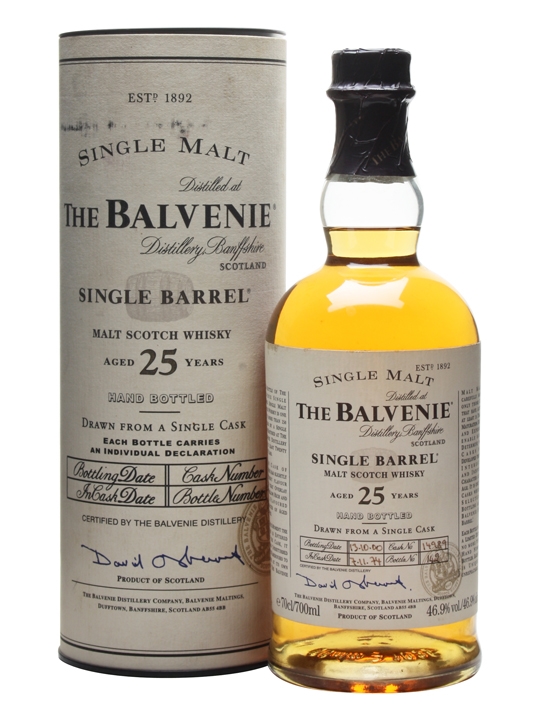 Ah, Balvenie – a name that is almost as household as single malt whiskies get, a marker of good whisky for laypersons and enthusiasts alike. It is perhaps for this reason that The Balvenie does not get a lot of attention in the whisky world, it quietly goes about its business of producing arguably one of the most solid core ranges of single malt in the marketplace.

Situated in Dufftown, the heart of Speyside, The Balvenie distillery sits a stone’s throw from Glenfiddich and indeed shares the same water source as its neighbour. The distillery is a traditional operation – not only does it boast a rarely-seen-these-days floor malting, the site is also home to a dedicated cooperage tending The Balvenie’s emphasis on cask management and a coppersmith keeping an eye on the stills. While the latter two clearly allow a fine level of control over processes that would otherwise be unobtainable, I remain sceptical of the effects of a floor malting in this day and age other than the added romantic experience for visitors on tours (which is not to be down-played – they really do add to the experience!).

As I have previously stated the core range from The Balvenie is admirably wide, from the staple 12 Year Old Doublewood through to 30, 40 and 50 year old malts (if your pockets are sufficiently deep!). There’s certainly enough depth there to alleviate the almost non-existence of independent bottlings.

The Balvenie also regularly releases a rather interesting set of single cask expressions, and today I have the pleasure of sampling an old bottle of the 25 Year Old Single Barrel – from cask 3209. Curiously, this cask was filled way back in March 1974 before being bottle in May 2002 – so despite being released under the 25 Year Old label the whisky is in fact 28 years old! Unfortunately the cask type is not specified on this bottle, but today’s releases have been rebranded as Single Barrel, Traditional Oak and declare maturation in American (ex-bourbon) oak and so it is reasonably safe to assume the same for older releases.

A rich and vibrant gold. A swirl of the glass reveals a rather viscous-looking liquid with slow, thick legs. This looks like a dram to chew over!

Initially there is lots of fruit, classic Balvenie toffee pennies mingling with warm woodspice before a hazelnut butter appears. Behind this there are some darker notes of roasted coffee and faint hint of leather. Given some time in the glass, things brighten up revealing red fruit and icing sugar. The addition of water accentuates the lighter perfume-y vanilla notes.

Rich, sweet vanilla and clotted cream fudge initially, the mouthfeel then dries with a fresh wood astringency (pencil shavings) present on the mid-palate. The back of the palate is fruitier with juicy sultanas. A drop of water highlights a lovely creamy mouthfeel.

The dried fruit continues to build on the finish, becoming brighter and juicier – blackcurrant and other forest fruit with a background of warm baking spice. Perhaps a result of spending such a long time in the bottle, but this dram really opened up after being left exposed to the air for a while. One to spend some time with!