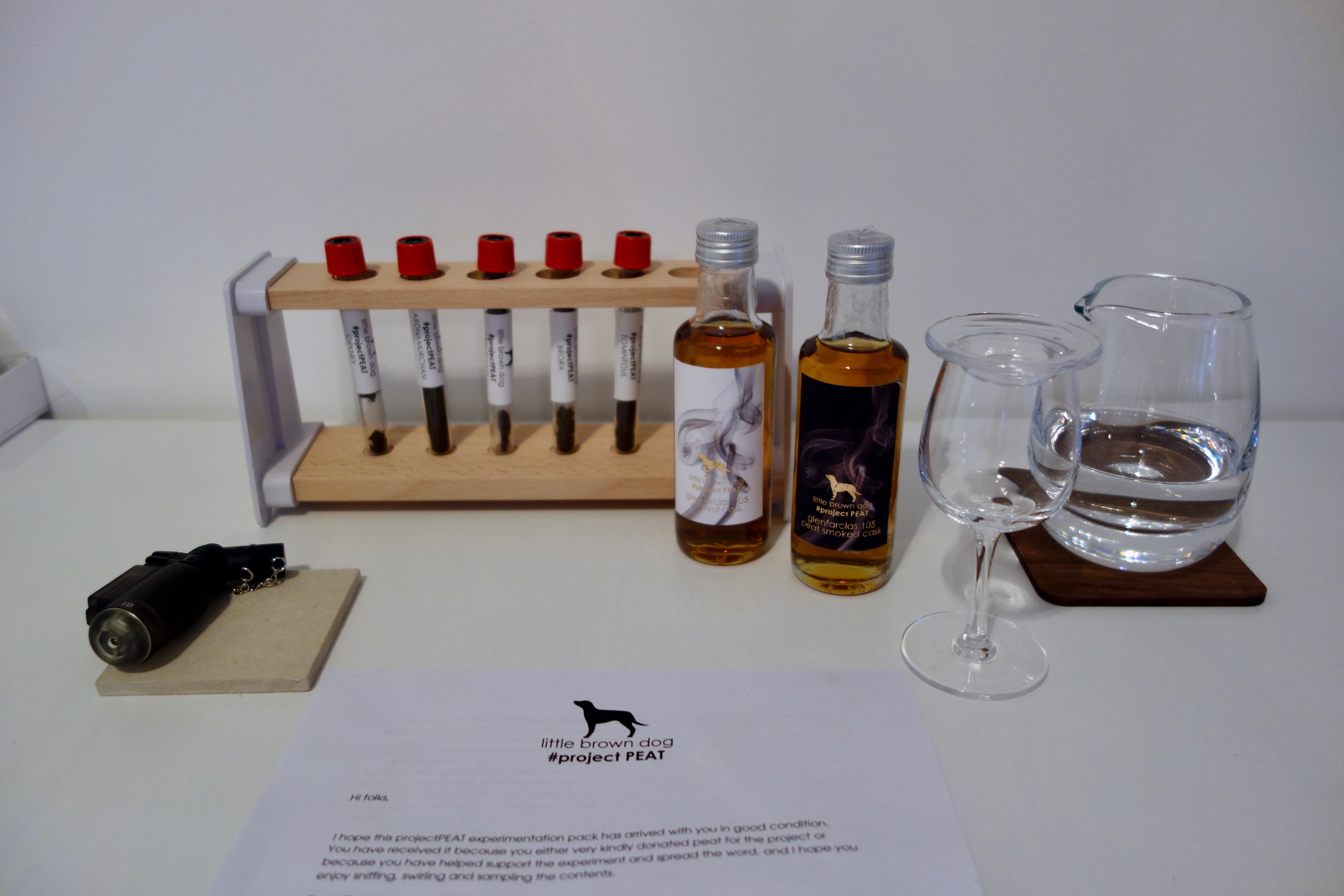 The concept of terroir should be familiar to any wine enthusiast: the natural environment in which grapes are grown – the makeup of the soil, the location of the vines (at various levels of scale), the climate of the surroundings all have a driving influence on the character of the resulting wine. Does the same concept apply to whisky? This is a source of much debate among enthusiasts and indeed within the industry itself. Bruichladdich are well-known for their commitment to the concept, with their sourcing and production reflecting this. Others, however, dismiss idea of the natural environment giving character to whisky, yet concede that the industrial environment (the architecture of the mash tun and wash back, and of course the stills) has such a definitive effect that even direct replications are extremely difficult. Depending on your viewpoint you could use the legendary Malt Mill distillery as a case for either side! Still others assert that the effect of both terroir in the traditional sense and the industrial environment are dwarfed by the effect of the very fine details of the whisky-making process (including everything from crop harvesting through bottling).

It is for the most part less contentious to speak of terroir when we talk about peat. Anyone who drinks Scotch whisky will likely be familiar with peat; that earthy-smoky flavour present in many whiskies (Islay in particular) that is acquired when the germinating barley is dried over a fire fuelled by this source. Fewer will be aware of exactly what this material is. Peat is a built up mixture of partially decayed vegetation and organic matter formed in wetlands where the obstructed flow of oxygen slows the rate of decomposition. Peat is essentially formed from whatever vegetation grows in a particular area, meaning peat bogs in different regions will be composed from different material, and hence it is feasible that the smoke produced from its burning will be chemically distinct (and more relevant for the whisky lover will produce different aromas).

In order to test this hypothesis – and to advocate the idea that more than a single aroma descriptor, peat can be a source of an entire range of aromas and indeed can be a versatile tool for the whisky producer – the fantastic and ever-creative Andrew Smith a.k.a Little Brown Dog has established #ProjectPEAT. This two-part project has seen peat samples generously donated from various whisky enthusiasts collected together into an impressive and fun experiment kit by Little Brown Dog. Part one takes a look at peat terroir by giving the opportunity to burn peat directly to differentiate aromas produced by the various samples. Part two takes a different approach and challenges how peat is used in whisky production: what happens when peat is used to smoke a cask prior to maturation? Will a smoked cask impart the same bouquet as peat smoke dried malt or ex-peated-whisky cask maturation?

Five samples of peat from various regions of Scotland were provided: Orkney in the Northern Isles, Ardnamurchan in the Western Highlands, Laphroaig on Islay, Brora in the North East Highlands and Tomintoul in Speyside.

Visually the samples are quite distinct: the colour varies, the textures vary from large clumps to a fine powder, and even without burning the different peat was subtly different in aroma.

Orkney
Quite a dark brown, the second darkest after Laphroaig. The sample is quite root-y, forms clumps and is solid to the touch. On burning, the smoke gives off an aroma which is quite perfumed, fairly rich yet gentle and not overbearing.

Ardnamurchan
On the lighter side, this sample is entirely powder like soil and is soft to touch. On burning it produces a dry smoke which is almost coal like. This is a much more “rough” smoke than the Orkney – perhaps the powdery consistency (which produced much shorter-lived embers) contributed to this?

Laphroaig
The darkest of the provided samples, this peat forms large solid lumps and looks very dense and compact – not much vegetation visible. A very pungent smoke with a pleasant richness is produced, the peat burning for a long time. Despite its pungency, the smoke is not at all “rough” like the Ardnamurchan. Only as the embers cool somewhat the famous TCP notes come alive.

Brora
Possibly the lightest of the samples, this peat has a texture similar to that of Orkney: lots of roots visible with (smaller) clumps formed with the addition of some soil-like powder. The smoke produced is very earthy and vegetal, with coastal aspects of salt and seaweed. A very rich and pungent smoke.

Tomintoul
This peat is on the darker side of the scale, with some hard clumps alongside a fair ratio of powder. This is another dense-looking peat with not much visually-recognisable vegetation. This sample burned very well and produced lots of smoke with a quite soft, dry and spicy pleasant aroma.

So there we have it – a clear distinction observed between the various samples. However with consideration to scientific rigour, regionality was not the only variable in the samples. As you can see from the pictures, the samples were of various consistency (e.g. Ardnarmuchan was ground to a powder), some samples appeared drier than others (which became clear on burning). This seemed to have a large impact on the nature of the smoke produced, leading me to believe that as well as terroir, the fine details of the process of cutting and preparing peat for the kiln will have a huge impact on the effect it will have on the resulting whisky.

In order to challenge convention on how peat is used in the whisky-making process, Little Brown Dog has taken a small finishing cask and smoked it – burning the peat in a food-smoking gun, piping the smoke into the cask and sealing it for two weeks (and then repeating the process). A litre of Glenfarclas 105 then spent a month in the cask. In order to isolate any change to the smoke itself, a control sample was also produced by finishing another litre of Glenfarclas 105 in the same cask prior to smoking.

Colour: No discernible difference from an off-the-shelf Glenfarclas 105.
Nose: Rich toffee with dried fruit, vanilla and other woodspice. Quite a bright character. There is a very slight grassy note with water, and on the sweet side a tiny hint of tiramisu becomes present given time in the glass.
Palate: Lots of toffee sweetness and vanilla, a slight floral note on the midpalate, and some sweet nougat.

Colour: Again, no discernible difference from an off-the-shelf Glenfarclas 105.
Nose: Initially there were similar base notes to the control cask with an added metallic note reminiscent of copper coins held in the hand. This really brings out the “juicy” fruit notes which was quite unexpected. Given some time in the glass the smoke makes its presence felt. It is quite a “dry” yet sweet smoke – quite different from peated malt – closer to smelling burning peat directly.
Palate: Again there are plenty of similarities to the control cask but with less full-on toffee. Whisps of smoke come and go from the midpalate onwards, bringing a smoky sweetness reminiscent of toasted marshmallow. This very gentle pleasant sweet dry smoke builds and dominates on the finish.

A smoked cask is a very interesting concept and one which has (in this case at least) produced some positive results. It is difficult to speculate on the viability of this as a production method on a larger scale – perhaps as a short finishing technique in small casks with plenty of wood contact the concept could scale, but I imagine that too long a maturation would lead to the smoke dissipating and any effects being neutralised.

What has been proven beyond doubt by this part of the experiment is that by using peat in unconventional ways you can add unexplored dimensions to whisky. Just don’t fall foul of SWA regulations!

I would like to extend my sincere thanks and appreciation to Little Brown Dog for producing the #ProjectPEAT experiment and for allowing me to take part – I have had a lot of fun thinking, drinking, and playing with blowtorches!

1 thought on “Peat Terroir: More Than Smoke and Mirrors”