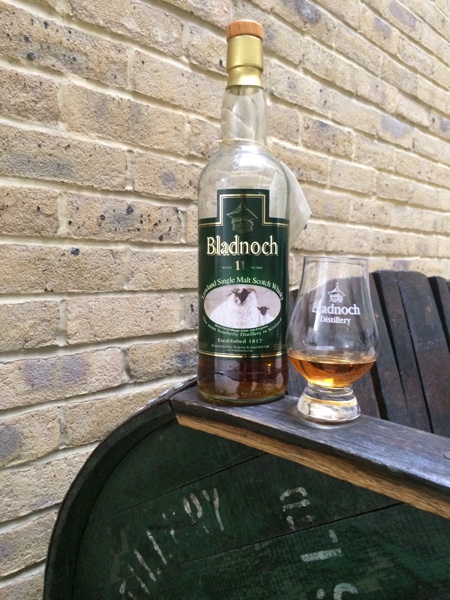 Bladnoch – Scotland’s most southerly distillery – has had some mixed fortunes in recent times. With production somewhat intermittent throughout its history (it was originally established in 1817), its fate looked sealed when United Distillers mothballed the site in early 1993 – part converting it into a hospitality reception centre.

Hope was restored little more than a year later when Raymond Armstrong purchased the site. It was ostensibly to become a holiday home but after much petitioning the green light was given for the stills to be fired up once more, with production commencing in late 2000.

Unfortunately the distillery entered administration in 2014 and the stills are silent once more. A buyer is currently being sought so hopefully the silence will not last long.

I was lucky enough to visit the distillery in 2013 and was impressed with the operation, it was clearly an asset to the local community. It was here I purchased a bottle of the 11 year old “sheep label” whisky, rather unusually for a lowland malt a lightly peated and sherried dram. Distilled on 16th November 2001 and bottled on 17th December 2012 this is very much an “Armstrong-era” bottling.

A rich, reddish gold shows plenty of influence from its time in a sherry butt. This is not going to be your typical light lowland dram!

A nice fresh nose showcases the distillery character, balancing nicely with the peat and sherry. Initially grassy, perhaps reminiscent of the green fields on the banks of the River Bladnoch! Sherry influence makes an appearance in the form of toffee and nuts, followed by a pleasing light dry smoke.

A soft toffee sweetness is balanced by tobacco leaves and earthy tones. Consistent with the back of the nose, a hint of hazelnuts is detectable.

A satisfying finish of tobacco leaf and hints of dark cocoa. The addition of water brings some very interesting liquorice and mint into the mix. Who said lowland malts lack complexity!