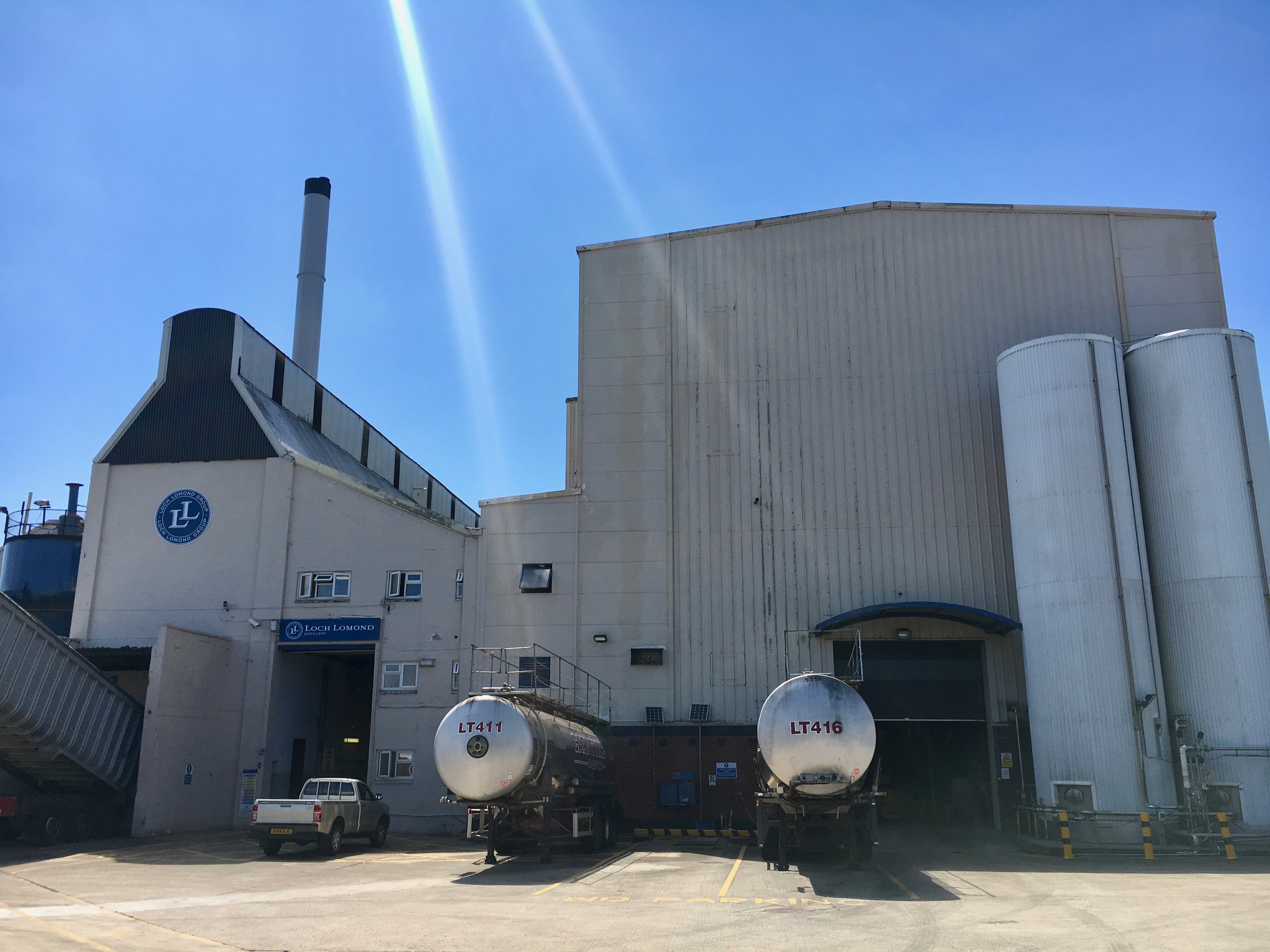 Amidst a gripe that alternated between lamenting poor use of language and dubious claims of uniqueness among larger players against a backdrop of an industry which has largely become homogeneous in its operation, Dave Broom in a recent article for scotchwhisky.com concludes that whisky’s continued success requires that “every distillery must be unique”.

Between the picture-postcard malt distilleries with their slick visitors centres and the behemoth grain whisky sites quietly pushing out the majority of spirit distilled in Scotland, Loch Lomond surely stands apart. Combining not only the traditional copper pot stills of the former and the towering continuous stills of the latter, Loch Lomond is also home to some rather curious equipment and employs distinctive processes seldom seen in the wider whisky world let alone Scotland.

Despite being situated just over a mile from the southern shores of the eponymous loch, Loch Lomond Distillery finds itself nestled not in some remote glen, but in an Alexandria industrial estate. A fitting metaphor for a distillery founded in practicality, one which rather than embracing the Scottish whisky industry’s collaborative model has chosen to take the path of self-sufficiency, having the ability to produce all spirit for the entirety of the distiller’s substantial portfolio in-house.

This model of operation is far more similar to the autarkic Japanese whisky industry than that of Scotland – where blended whisky is supported by a fabric of agreements, favours and reciprocation allowing trading of spirit between competitors. An interesting side-effect of this approach is that it begets a fundamentally different approach to whisky-making. Where traditional Scottish distilleries are motivated to yield a single, consistent “house style”, a distillery aiming to be self-sufficient in a product range must embrace diversity and have the ability to produce multiple styles of spirit; the propensity to adapt is expedient.

During a recent tour of the site very generously arranged by superstar Brand Ambassador Ibon Mendiguren, I saw evidence of this diversity and flexibility throughout Loch Lomond’s operations. Despite what the marketing departments of many malt distilleries will tell you, there is only so much variation in character you can accomplish through wood policy. To more fully incorporate variety, Loch Lomond begin at fermentation. Through the use of 3 different types of yeast (including a yeast ordinarily used in the production of Chardonnay wine as well as some more standard variations of distiller’s yeast), washes with a wide range of flavour profiles are possible. This is combined with long fermentation times to help draw variation in character, with time spent in the washback averaging 120 hours (from a minimum of 96 hours and reaching a maximum in some cases of multiples of this!).

With this palette of varying character there is a wash type specifically suited to each distillation style available in the still room. The traditional copper swan neck pot stills occupying the back of the stillhouse will be quite familiar to anyone who has visited a common-or-garden malt distillery and are operated without surprises, typically being charged with a wash on the more floral end of the spectrum. We very rapidly depart from the ordinary as we move back across the stillhouse to find pairs of unusual “straight-neck” pot stills; copper contraptions combining a regular pot still base with a less-than-regular straight neck housing rectifying plates and incorporating optional cooling jackets. Charged with a more fruity wash, this character can be manipulated to varying degrees in this versatile still by running with the cooling jackets switched on to maximise reflux and produce a lighter spirit at 85% ABV, or alternatively a heavier spirit with a more-regular 65% ABV when the jackets are switched off. This veritable exhibition of still types is complete with a stainless-steel-clad continuous still nestled off to one side. However this is not involved in the production of the “standard” grain produced at Loch Lomond – those stills can be found next door – instead this still is utilised in producing a spirit from 100% malt barley. The resulting spirit is unique in Scotland, with the only rough equivalent being Nikka’s Coffey Malt in yet another link between Loch Lomond and the Japanese-style approach to whisky production. Back in Scotland under the SWA’s jurisdiction, a single malt whisky is defined as being distilled in a copper pot still, therefore Loch Lomond’s bottling of this whisky is marked as single grain whisky.

Between the multiple wash types and several styles of distillation there are theoretically up to 12 styles of spirit producible in this one stillhouse (although typically only a subset are utilised). This is before we consider the malt itself, which at Loch Lomond will be in one of 3 forms: unpeated, a medium-level peated malt at 25PPM and a heavily-peated 50PPM. Of course the peat level of malted barley does not necessarily translate to the peat level of the produced spirit: with different phenols recovered at the various stages of distillation the same peated wash can yield quite different peat character depending on the distillation style utilised. For example while the traditional pot stills produce a peated spirit that would be roughly familiar to fans of Islay whisky, the higher proof spirit from the straight-neck stills extracts an altogether different family of phenols resulting in a spice-led spirit.

With an emphasis on diversity of spirit and producing clean, flavourful new make, Loch Lomond sensibly implements a wood policy where the spirit character shines. Utilising mostly American Oak from its on-site cooperage, refill casks are complemented with first-fill ex-bourbon and rejuvenated casks from the cooperage’s own de-char/re-char facility. More esoteric wood is used where appropriate – but without being limited to a hammer, not everything is considered a nail!

The heterogeneity of this Wonka factory of whisky is suitably illustrated as we move to the tasting room. Where a more common distillery may offer a vertical flight of a handful of expressions, Loch Lomond presents one with an almost-overwhelming showcase of expressions reaching into double figures! With such a large portfolio some careful branding is necessary to avoid confusing or overwhelming the consumer. This is something Loch Lomond have improved upon in the last number of years, with expressions falling into one of three primary ranges.

The eponymous Loch Lomond range attempts to represent the distillery as a whole, with single malt expressions typically comprising spirit from several styles produced on site to produce a balanced profile. The (100% malt barley) Single Grain is also bottled under this brand, as are the rather unique blended whiskies produced entirely under one roof – single blends if such a category existed.

The Inchmurrin range showcases how far the spirit can be pushed in one direction, utilising the higher proof distillate from the straight-neck stills. From a wash produced by the fruit-forward yeast and subjected to an extended fermentation, this distillation style is well-suited to extracting as much of this character as possible, resulting in a light, fruity whisky.

The peated whisky is marketed as Inchmoan. These expressions showcase the complexity you can achieve from peated malt by utilising different distillation techniques. Typically combining the medicinal-character whisky from the pot stills with both dry, smoky whisky from the lower proof cut and spicy whisky from the higher proof cut from the straight-neck stills, Inchmoan whiskies tend to exhibit a quite distinctive and intriguing character.

One distillery, three core ranges, several spirit styles, single-blended whiskies… Any distillery looking to innovate with a view to gaining that ever sought-after uniqueness will do well to harness some aspect of production which the folk at Loch Lomond Distillery haven’t been quietly exploiting for years.

My sincere gratitude to the wonderful Ibon Mendiguren for taking so much time out of his day to show me around this most fascinating of sites.