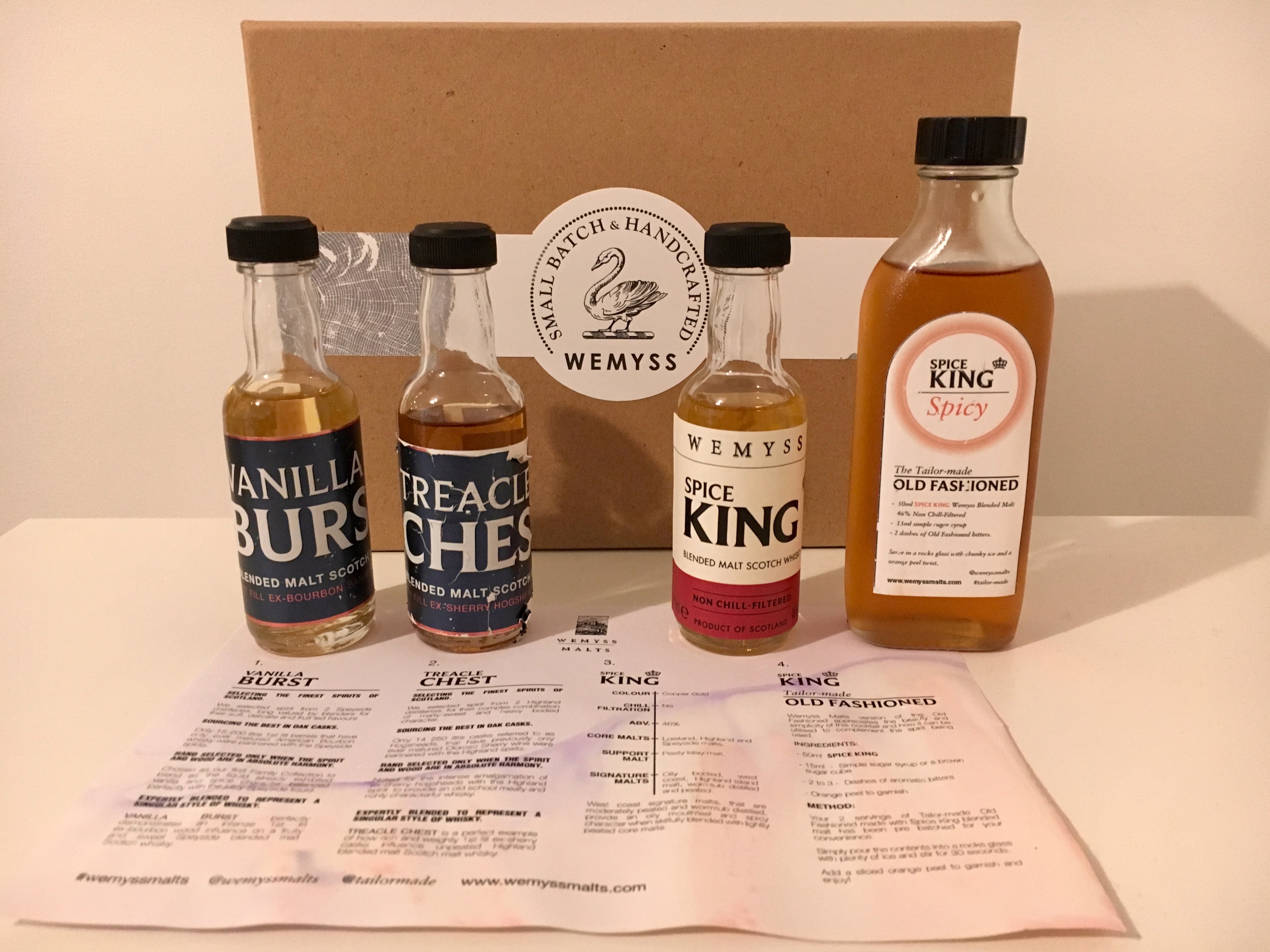 The Wemyss family have long-established links with the whisky industry tracing back to the early 19th century when the founder of Haig’s built Cameronbridge distillery on Wemyss’ land. Continuing a family tradition, Wemyss Malts is a family owned bottler established a little more recently in 2005. Wemyss are known for naming their whiskies after prominent flavour descriptors, undoubtedly a particularly effective tactic for the blended malt range where this serves to draw in newcomers overwhelmed by increasingly busy store shelves.

This summer saw the expansion of this blended malt line with a new series known as the Wemyss Family Collection; a range of blended malts from spirit matured in casks sourced by Wemyss Malts, as opposed to whiskies that have been purchased at maturity. To explore this additional dimension of specific wood influence, the first two releases are focused on two ends of the scale: Vanilla Burst showcases the vanilla notes of 1st fill ex-Bourbon barrels while Treacle Chest utilises 1st fill ex-sherry hogsheads to bring darker, richer notes. Strangely it is unspecified if the sherry hogsheads are from European or American oak, as this is arguably as important a factor in the influence exerted on the maturing spirit. Both are bottled at 46% ABV and feature no artificial colouring or chill-filtration.

I recently had the pleasure of sampling these releases through a Tweet Tasting arranged as always by Steve Rush of The Whisky Wire. As well as sipping and savouring the Family Collection we were treated to the classic Spice King blended malt, and to top things off a tailor-made Old Fashioned using the same whisky as a base.

A blend of two Speyside whiskies known for their “soft, delicate and fruit-led flavours” matured in 15 1st fill ex-Bourbon barrels.

Nose: Lots of ginger initially, with vanilla toffee in front of some fresh grassy notes. The vanilla is present but I wouldn’t describe it as bursting. Given some time soft orchard fruit appears behind the warming spice.

Finish: Oak, vanilla and ginger bring things to a close – a little more abruptly than I would have liked.

While certainly an example of what 1st fill bourbon can do, it felt a little youthful behind the cask influence.

Nose: Definitely a Ronseal dram – so much rich treacle, brown sugar, baking spice with orange peel and dried fruit. Given some time in the glass, mouth-watering boozy dried fruit begins to dominate.

A very enjoyable interplay between intense sherry/wood influence and malt character – a good evening sipper as the nights draw in!

A blend of over 10 malts featuring in particular moderately peated, wormtub-condensed spirit from the Highlands and Islands.

Nose: Cinnamon, nutmeg and some lighter baking spice on a big slab of honeycomb, with a touch of burnt marshmallow. After some time, the smoke from the bonfire-toasted marshmallows waft ever closer.

Taste: Initially lighter and sweeter than expected with nutmeg and the marshmallows from the nose. The earthy notes and smoke return on the mid-palate.

Finish: The sweetness of a chai tea, an appropriately long finish on this dram.

Spice King is classic Wemyss Malts; a good example of how character and complexity can be achieved through blending at a reasonable price point.

The evening was rounded off with a bottled Old Fashioned with a Spice King base. The bitters used gave the cocktail an intense hot cinnamon note on the mid-palate reminiscent of Red Hots candy. This balanced quite nicely with ginger spice, citrus from the garnish and just a touch of the peat from the whisky making its way through.

It is good to see Wemyss Malts expanding the range of approachable blended malts and the new Family Collection adds a dimension with the focus on cask influence. Whether this slightly more experimental side to the blended malts range is effective in grabbing the attention of newcomers is another topic but these are good examples to point to when asked for tangible evidence of the influence of different wood.

Thank you as always to Steve Rush for arranging this Tweet Tasting and to Wemyss Malts not only for providing the samples but in going the extra mile to ensure I had a full complement of drams for the evening after suffering a clumsy postman.