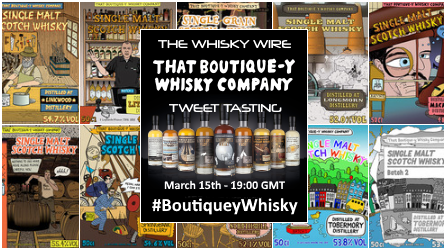 Independent bottler That Boutique-y Whisky Company has certainly had a busy start to 2017 – releasing plenty of new batches from established distilleries, countless single grain whiskies, teaspooned malts and their first ever Irish single malt whiskeys. Needless to say that when Steve Rush (@TheWhiskyWire) announced a Tweet Tasting involving some of their latest offerings, I was all over it!

It turns out I was by no means alone – this was a lively and fast-paced Tweet Tasting involving a larger-than-usual contingent of over 40 whisk(e)y aficionados filling Twitter timelines with Boutique-y broadcasts.

As an independent bottler, you have the freedom (I would say the obligation!) to release whisky you wouldn’t normally see from the distillery’s label – whisky which can’t be shoe-horned into a vatting matching the “distillery profile”; those whiskies which are surprising, unusual and sometimes downright weird. That Boutique-y Whisky Company have really been settling into this role of late and this was in evidence during the tweet tasting, with tasters expressing surprise to the extent they were double-checking their sample ordering! Of course unusual expressions can divide opinion, and this was demonstrated nicely with the Secret Distillery sample: my highlight of the evening but more of a lowlight for others. As always the Boutique-y bottle labels are amusing, quirky and full of allusions – does the image of 16 men over 24ft tall with “swan necks” help give away the secret distillery?

The range for the evening included a grain whisky, the aforementioned Secret Distillery, a couple of offerings from classic distilleries and the first Boutique-y Irish whiskey.

Nose: Initially spirit-y, lots of vanilla and coconut along with some lime citrus & tropical fruit. Given some time, the alcohol calms down leaving luscious vanilla clotted cream fudge. The reduced nose adds sweet shortcrust pastry and an intensified ginger spice.
Taste: Quite consistent with the nose – lots of vanilla, reminiscent of cream soda. A touch of cafe au lait.
Finish: Again a very consistent whisky, leaving behind light vanilla and coconut.

Nose: Poached pears with stewed dried fruit, lots of wine influence to be found but also quite zesty. Sticky hot cross buns – a good Easter dram!
Taste: A pleasant balance of summer berries (overripe strawberries & raspberry) & spice (cinnamon, fennel). On the richer side there is maraschino liqueur and a hint of dark chocolate.
Finish: Nicely drying with the dark chocolate in domination.

Nose: Opens with classic Mortlach char-y/meaty goodness before taking an unexpected turn with playdough & light fruit blossom in the background. With some time in the glass the nose opens right up, revealing orange marmalade and Mr Sheen furniture polish.
Taste: A very creamy mouthfeel with lots of oaky vanilla spice. Some blackcurrant way in the background. The reduced palate introduces lots of baking spice: ginger root, cinnamon and nutmeg.
Finish: Crème caramel sweetness gives way to ginger and cinnamon.

Nose: Sweet and fruity: tinned peaches & other Del Monte delights balance with a gentle sweet spice and soft floral notes. The longer this sits in the glass, the spicier it becomes with lashings of ginger bread.
Taste: Another creamy mouthfeel, with orange blossom, sweet perfume and fudge. A drop of water accentuates the gentle sweetness: white chocolate mousse.
Finish: The gentle sweetness of white chocolate lingers on.

Nose: Incredibly fruity! Lots of peach gummies and other chewy sweets, waxed apples and passionfruit.
Taste: Lots of peach and passionfruit from the nose alongside other tropical fruit: papaya and mango. One taster had hubba-bubba gum! Behind the fruit there are sugared doughnuts & other bakery treats.
Finish: More fruit with a slight hint of dairy sweetness – mango lassi.

My thanks as always to Steve Rush @TheWhiskyWire for arranging another enjoyable Tweet Tasting and of course to That Boutique-y Whisky Company for providing the samples.