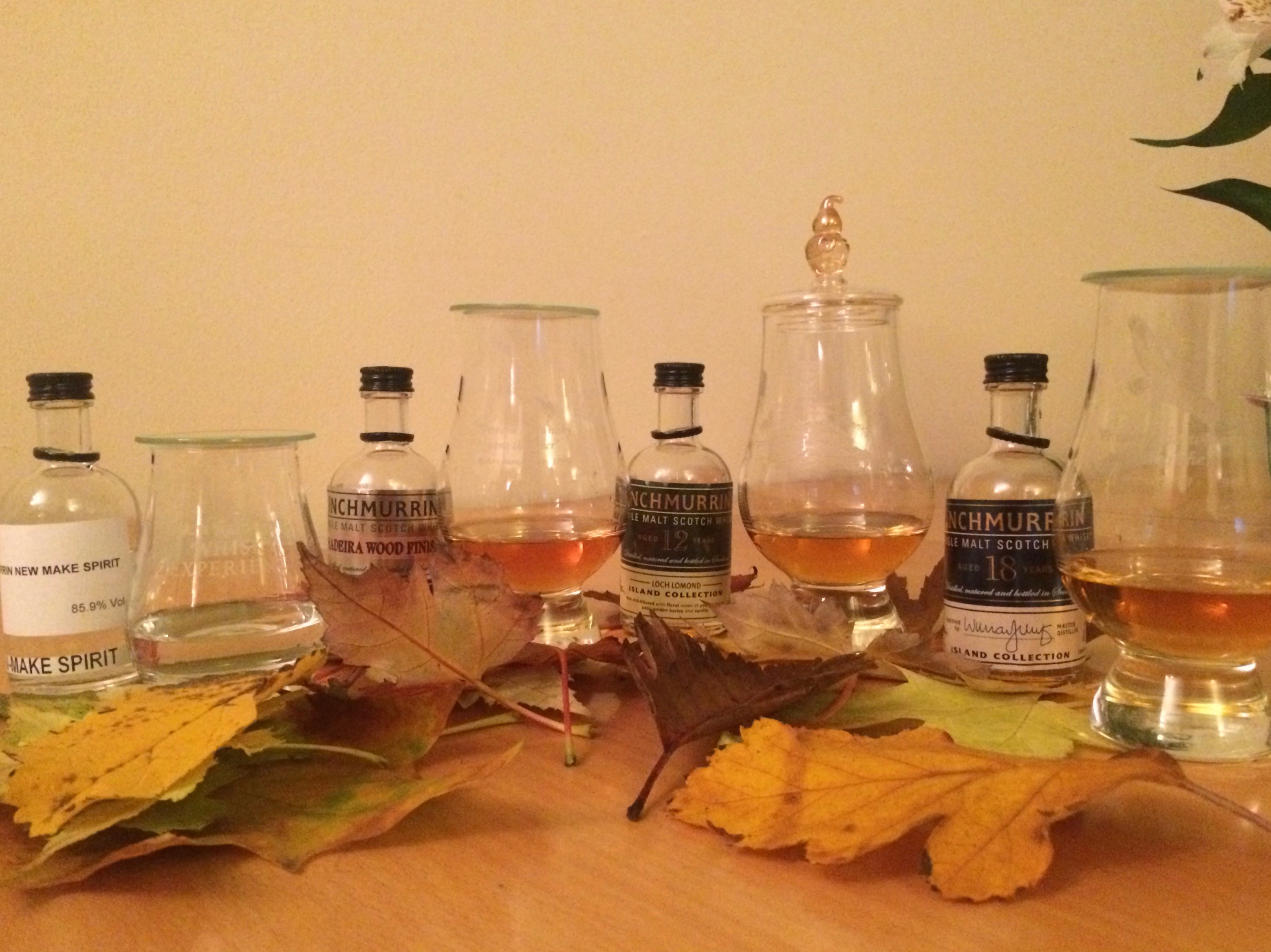 As well as being an island in Loch Lomond, Inchmurrin is the name given to a whisky which is one of a number of styles produced by the Loch Lomond Distillery.

The Loch Lomond Distillery is interesting in the variety of stills it has on site – this is what allows it to produce a such a wide range of whisky. The most interesting are the four Lomond-type stills: pot stills with rectifying heads. This allows fine control over the spirit produced, and is the reason for new make with a very high ABV (upwards of 80%).

The spirit produced for Inchmurrin whisky comes off of these stills, and typically has a light, floral character.

Through a Tweet Tasting arranged by The Whisky Wire, I had the pleasure of sampling a vertical of offerings from the revamped range including a 12 year-old, a madeira wood finish and an 18 year-old, as well as sampling the new make spirit.

Nose: Surprisingly rounded and soft despite a very high ABV of 85.9%. The nose is fruity: initially some apple and pear and a lot of sweet peach notes. Somewhere in the background is coconut water. Reduced, the nose offers a more perfumed note, and given some time strawberries and raspberries make an appearance.

Taste: Sampled neat there are some sweet notes present and plenty of cereal, however it is difficult to get past the high alcohol content – great care must be taken if you want to taste anything for the rest of the evening! Reduced, the palate becomes more perfume-y and grassy, with some of the light forest fruit notes present.

Finish: Unsurprisingly, the spirit’s finish is drying with a big hit of alcohol.

Taste: Nice creamy mouthfeel. The sweet shop theme from the nose continues along with peach syrup from the new make.

Finish: The peaches begin to dominate with some warm vanilla spice – a delicious peach melba.

Nose: Not as intensely fruity and sweet as the 12yo, there are egg custard tarts, nutmeg and other warm spice with a touch of marzipan in there too. With water, soft red apples come to the fore.

Taste: Soft fruits are more dominant than the nose would suggest: apple blossom and a sweet perfume. The spice & sweet nuts from the nose are also present.

Nose: The fruity notes of the 12yo/madeira are pretty much gone! Lots of leather, a hint of tobacco leaf. Something quite earthy – dark mushrooms. After some time a waxiness appears. The reduced nose is richer with the addition of dried fruit – christmas cake with marzipan.

Palate: Lots of pencil shavings & damp earthy notes, then something a little sweeter and spicier – dundee cake. Leather throughout.

Overall this is quite an impressive lineup – the 12 year old is quite stunning value at a RRP of £36.00. The 18 year old is a great after-dinner dram to spend an evening with – everything you’d expect from a Christmas dram with the addition of some fantastic earthy notes to give it an extra dimension.

Many thanks to Steve Rush @TheWhiskyWire for arranging another great Tweet Tasting and Loch Lomond Group for providing the samples.