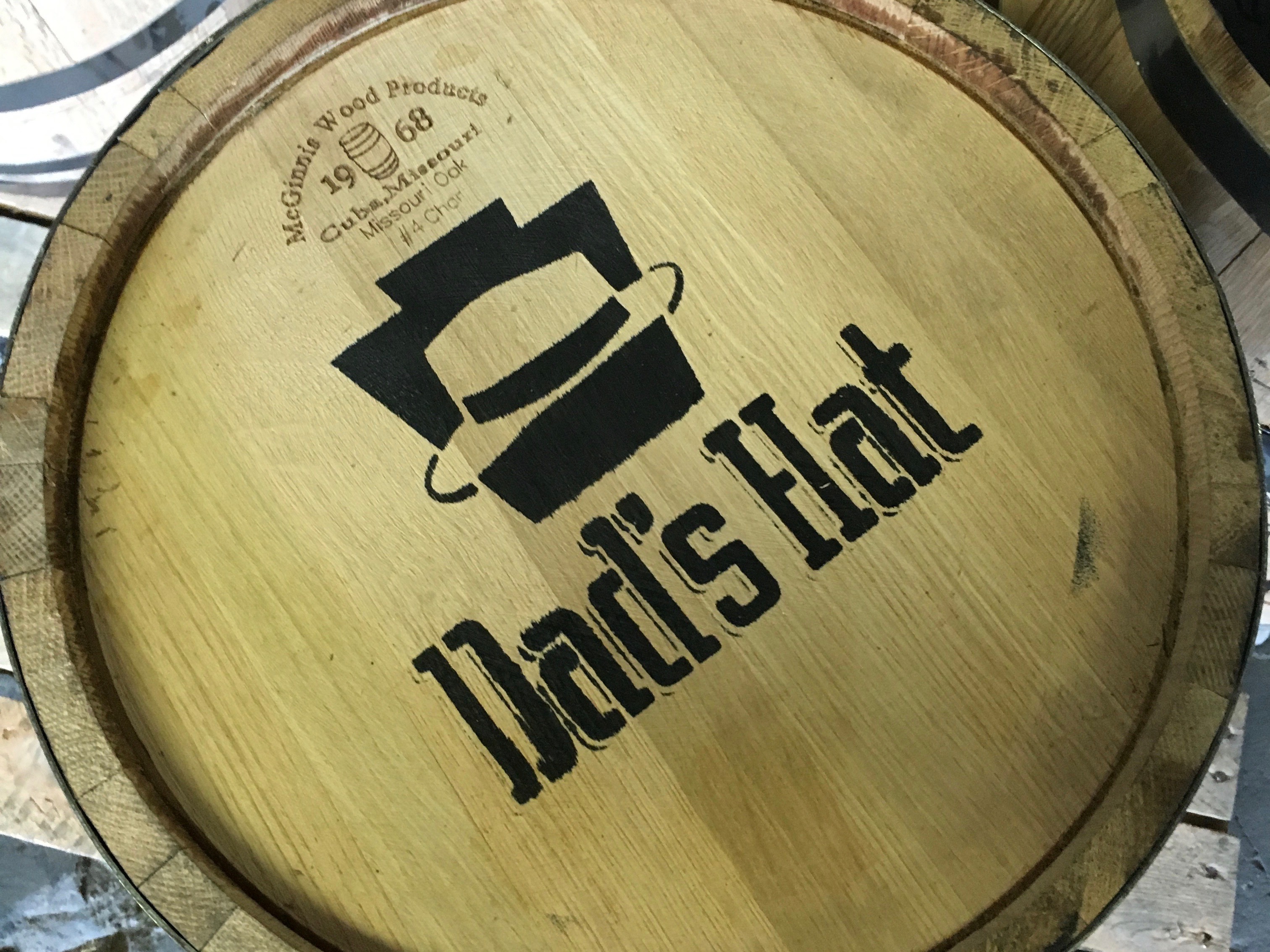 During a recent trip to the USA I had the pleasure of visiting Mountain Laurel Spirits in Bristol Pennsylvania, home of Dad’s Hat Pennsylvania Rye Whiskey. I’ve visited plenty of malt whisky distilleries in Scotland, but this was my first American whiskey distillery visit. It was certainly a different experience (for one thing it was far, far hotter than any distillery in Scotland!), with highlights including tasting new make straight off the still (there’s no spirit safe here!) and taking a sample from the marrying-vat with a ladle (I need to drink more whiskey from ladles!). I was impressed with both the process and philosophy at Dad’s Hat; the following are my notes from the visit (including some tasting notes towards the end).

The Story of Rye Whiskey

Once upon a time American whiskey was rye whiskey; farmers would grow the crop as it was a grain more suited to the North-American climate than barley, and any excess grain at the end of harvest would typically be distilled. Right at the centre of rye production in post-colonial America was Pennsylvania; indeed it was at the heart of the Whiskey Rebellion – an episode reinforcing the importance of whiskey to a fledgling nation.

After the civil war rye whiskey found itself increasingly competing with the bourbon produced in the southern states, and while both spirits suffered immensely during prohibition, rye whiskey never really recovered and was almost consigned to history.

Thankfully we have seen a revival in recent years, arguably fuelled — at least initially — by cocktail bartenders exploring old recipes. This spark has ignited several craft distilleries across the United States, including Dad’s Hat.

Dad’s Hat is named for the fedoras worn by founder Herman Mihalich’s father. Growing up in an apartment above a family-run bar provided the interest that would eventually lead Herman and his longtime friend John Cooper to resurrect Pennsylvania Rye Whiskey.

The story of re-introducing a historical style of whiskey is not simply location-based convenience for a marketing department: not only do Dad’s Hat use a mash bill consistent with old Pennsylvania (or more specifically Monongahela) Rye, they have worked with a local university’s agriculture department and have tapped the US Department of Agriculture’s seed repository to grow local strains of rye that have not been planted in generations.

The Pennsylvania style of rye whiskey contains an aspect of malted grain to aid fermentation and tends to forego corn entirely – Dad’s Hat is no different. The mash bill is 80% rye, 15% malted barley and 5% malted rye. Grain selection is taken seriously – not only is the usual distiller’s malt omitted in favour of a far more flavourful variety, the distillery keeps a close working relationship with farms supplying the rye (the usual supplier is a half hour drive up the road). This feedback loop allows for a great deal of experimentation: “let’s see the effect of a later harvest”, “how does this field differ from the other”, etc.

Observing the whiskey-making process here, there are immediate notable differences from a typical malt distillery: the mash does not end with lautering to separate wort from grain – fermentation/distillation takes place “on the grain” for American rye whiskey. Fermentation is a slow process at Dad’s Hat – taking around seven days – encouraging a fairly estery, fruity wash. Since this stage is clearly a potential bottleneck in any distillation process Dad’s Hat have installed three additional fermenters since my visit to facilitate an increase in production.

Dad’s Hat operates two stills: a traditional copper pot still (around 2,000 litres) and a small column still – both manufactured by Carl, a very popular choice for new operations these days. First distillation takes place in the pot, with a second distillation through the column. What was very interesting to me about this second distillation is that the setup includes a thermostatic valve controlling the temperature of the water entering the condenser jacket – essentially allowing adjustable reflux with the twist of a knob! With a large amount of reflux taking place in the column you can almost consider the spirit as being 2.5 times distilled.

Maturation takes place on the same site as distillation – the Southeastern Pennsylvania climate exposes the resting spirit to temperature fluctuations far greater than anything a cask in a dunnage in Scotland would ever see (it was north of 40°c during my visit in August!). This, combined with the majority of spirit being initially filled into new charred quarter casks means that the spirit picks up character from the wood in short order. You will also see some ASB casks around the warehouse – these tend to be used for longer maturations such as straight rye (more on this soon!), and to mix things up there are also some ex-wine casks used for finishing: Dad’s Hat produce an port finish and vermouth finish rye.

Pennsylvania Rye Whiskey – The core of the range, fully matured for 6 months in the quarter casks. This has a classic rye nose of cinnamon, allspice and other baking spices. There is a definite biscuity sweetness from the malt and there’s an interesting floral aspect too.

Vermouth Finish – This is the same initial spirit as above, before finishing for 3 months in ex-vermouth casks. The same distillery character is present, but the vermouth finish brings with it a certain light freshness to the spirit; citrus peel and other botanicals can be found on the nose along with a sweet vanilla. Very interesting character!

Port Finish – Again the same initial spirit, this time spending an additional 3 months in ex-port casks. The richness of the port finish really brings out the more exotic baking spices: allspice and cloves are prevalent with maraschino cherry and floral notes in support.

“Sombrero Blend” – If you don’t believe in terroir affecting whiskey, look away now! This spirit was initial destined to be a regular batch of the classic rye, but on sampling a few casks, something was different… This batch is far spicier than the typical classic batches: mouth-watering jalapeño peppers, a salty tang, lots of lime and other citrus. The difference between this batch and the others similarly maturing in the next casks over? About a half hour drive; the rye for this batch was grown on a farm in Lancaster County as opposed to the usual Bucks County producer.

As hinted at above, Dad’s Hat are currently expanding operations so hopefully there will be more of their spirit available in the year’s to come. Additionally, there are some exciting new bottlings in the pipeline – look out for a Bottled in Bond cask sale, and a very promising Straight Rye (review here soon!) – both due in October.

Thank you to Herman and John at Dad’s Hat for taking the time to show me around!