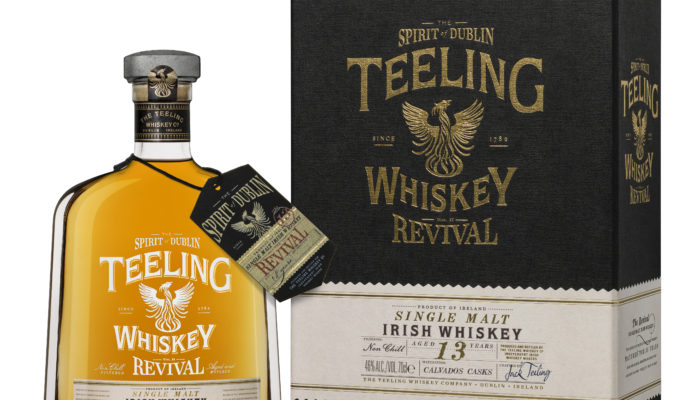 Doesn’t time fly! It has now been over a year since The Teeling Whiskey Company made the jump from sourcing and finishing Irish whiskey under their brand to producing their own whiskey at Dublin’s first distillery in 125 years. Since the opening of the distillery in Dublin’s Newmarket the visitor’s centre has been a popular destination for tourists and whiskey enthusiasts alike, winning awards in the process.

Distilled in 2002 – most likely at Cooley distillery, the spirit was initially matured for 12 years in ex-Bourbon casks before being finished for 1 year in 250 litre ex-Calvados barrels.

I’m quite sure this is the first Calvados-finished whisk(e)y I have come across; it is certainly the first Calvados-aged Irish whiskey to be made available. Teeling have been innovative with casks in the past to good effect (e.g. their single grain – fully matured in ex-Cabernet Sauvignon barrels), and it is good to see this continue. Having said that, I hope that when the Dublin spirit reaches maturity we also see one or two expressions where the casks take a back seat allowing us to explore the new distillery’s character.

Light apple juice. Quite an obvious one for ex-Calvados casks perhaps! This does tell us that the initial ex-bourbon influence should be minimal, allowing the Calvados influence to shine.

Lots of light, fresh fruit – melon, lychee and fresh pears. Baking spice – particularly cloves, pastry – tarte tatin. There is also a slightly sharp (youthful?) alcoholic sensation at the end of the nose that I was not a fan of, but overall it does not detract from the light, spring/summery vibe.

The back of the palate presents a slightly peppery alcoholic note consistent with that found on the nose, leading to a dry and crisp finish. A small drop of water reduces any tartness and leaves the pleasant integration of orchard fruit and spice to prevail.

Thank you to The Teeling Whiskey Company for providing a sample of this whiskey.