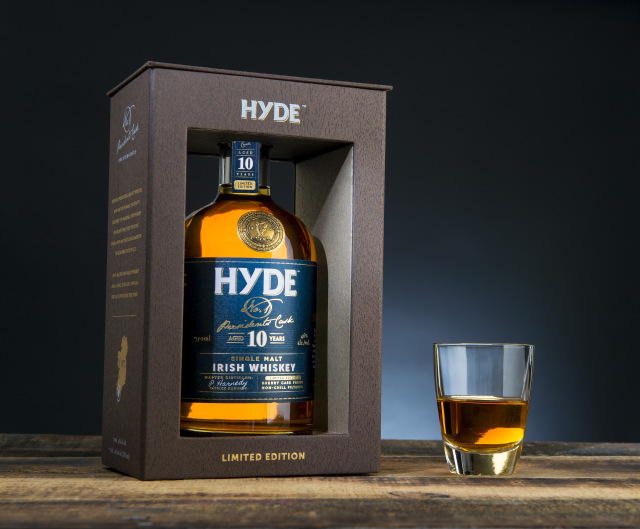 At first glance the name Hyde on this bottling of Irish Single Malt Whiskey would appear to be a nod to Douglas Hyde, the first President of Ireland – the moniker “President’s Cask” should make that obvious. However a little research on the brand reveals that the name is also shared with brothers Conor and Alan Hyde, the owners of the company behind the whiskey – brand new Hibernia Distillers.

Hibernia is a new distillery based in Cork, the latest in a line of Irish distilleries leading something of a renaissance in the field. Of course given that Hibernia Distillers has only been around for a year we won’t get the chance to sample their own spirit for some time yet, so in the meantime Hibernia are following a common pattern and are releasing single malts distilled elsewhere and applying their own cask selection and finishing skills.

And so we have the 10 Year Old “No 1 President’s Cask”. A double-distilled, single malt whiskey, possibly sourced from Cooley Distillery (although this is unverified). It has spent a minimum of 10 years mostly in first fill ex-bourbon casks before being finished in Oloroso Sherry butts, yielding a modest outturn of 5,000 bottles. You can pick one up from the chaps at Master of Malt for just north of £50, all in all quite reasonable.

The first wave brings lots of sweet fruit, gummy peaches in particular. There’s a somewhat “fizzy” edge to this, reminiscent of refresher chews. The first fill bourbon makes itself known with some vanilla spice, and the dryness of the Oloroso influence is present with a definite Coca Cola.

Young wood comes to the fore initially with pencil shavings and dry wood spice, delivered on a nicely creamy mouthfeel. This is followed by the Coca Cola from the nose along with malt making an appearance in the form of digestive biscuits.

Lashings of caramel and spice round things off on the finish. This is an interesting play between the sweet “tinned fruit” that I have found in a few Irish whiskies and big sherry notes. As with a lot of Irish offerings at the moment we can only contemplate how the new distillery’s own spirit will compare, but there is promise in the cask selection skills shown at the given price point for this release.

Thank you to Hibernia Distillers for providing a sample of this whiskey.