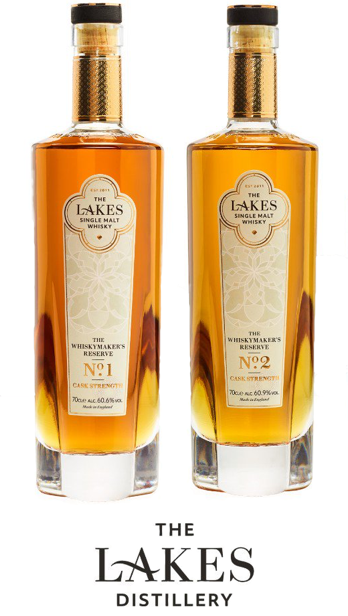 What a difference a year can make. A writeup on this site of the oft-denigrated Steel Bonnets blended malt earlier this year tracked the evolution – and maturation – of The Lakes Distillery branding, from vague and suppositious notions of prestige and a focus on place as opposed to product, to an elegant and consistent message where spirit and process is placed front and centre.

This transformation is concluding at a timely juncture, with the maturation of spirit in The Lakes’ warehouse providing the first general releases of whisky from the distillery – an opportunity for enthusiasts to determine if the attention to detail throughout the fermentation, distillation and maturation process detailed in such eminent fashion has produced something worth talking about – and worth drinking.

After all, the detail whisky geeks like to see are merely markers for the potential for flavour, the potential for quality. It is of course still possible to produce something disappointing despite all of this, but focusing energy on these aspects of production certainly acts as a good indicator.

First releases should serve to introduce the distillery to the drinker. While one may have some interesting and particularly tasty spirit in the corner of the warehouse that is the result of some unusually active or particularly eclectic wood, unless one is prepared to follow this up with further releases following the same trend then the drinker may struggle to get a sense of what to expect from the distillery as it matures. The establishment of a house style is vital as a distillery pursues its place on shelves.

The Lakes Distillery has under the stewardship of Dhavall Gandhi settled on a style focused on ex-sherry cask maturation. Though far from bludgeoning rushed spirit with staves of quercus alba and quercus robur still dripping with residual seasoning sherry, the intention is to complement well-made spirit with active wood, and to take an active role in the maturation process to intentionally build layers of complexity and flavour – élevage to borrow a term from the wine world. To the cynic this may sound like an embellishment on cask finishing, but the key difference is that the transfer of spirit between casks forms an intrinsic part of the maturation process throughout, as opposed to an afterthought or an attempt to “save” poor liquid.

This process is intended to allow the creation of different interpretations of the same house style. The Whiskymaker’s Reserve series of expressions aims to showcase this ability, with Dhavall speaking often of varying the architecture between releases. With the release of No.2 closely following No.1, this affords a welcome opportunity to both take a first look at The Lakes’ output and to get a feel for the direction the distillery is taking.

The Lakes Whiskymaker’s Reserve No.1

A combination of ex Pedro Ximenez and red wine casks from American, Spanish and French oak, the inaugural general release yielded 5,992 bottles and is bottled at a cask strength of 60.6% ABV without chill filtration or colouring.

Nose: Initially bright with red fruit notes, more sweet than tart – a touch jammy. The appearance of biscuit notes leads one to think of jammy dodgers! Quite surprisingly the red wine aspect appears to dominate the PX at least initially, but given some time in the glass additional layers of dried fruit, chocolate and earthy spice notes develop, no doubt Pedro Ximenez’s doing.

Taste: A beautifully silky, mouth-coating texture delivers notes that pick up where the nose left off. Booze-soaked cherries, digestive biscuits and dark chocolate. Ginger and other baking spice appear from the mid-palate onwards.

Finish: Settles in to a traditional sherried finish of dried fruit with a lingering nuttiness.

Prior to sampling I was intrigued at a red wine and PX combination: my instinct would have thought PX to be by far the dominant player here, but with careful blending a seriously more-ish whisky with plenty of depth and complexity has been developed.

The Lakes Whiskymaker’s Reserve No.2

Similar in composition to the No.1, the second release has added ex-bourbon casks to its stated vatting, bottling at a slightly higher cask strength of 60.9% ABV, again with neither chill filtration nor colouring. This release was a slightly lower outturn, with 4,778 bottles available.

Nose: More intense than No.1, this time the richer sherry notes take the lead with raisins and dark chocolate, crystallised ginger lurking behind. The dark sweetness of treacle appears given some time.

Taste: Milk chocolate and a touch of vanilla, a touch wine-y/fruity. Sultanas soaked in syrup appears from the mid-palate onwards, with the chocolate becoming darker and being joined once again by ginger.

Another sumptuous dram with the intensity of a cask strength sherried whisky carried nicely by a velvety mouthfeel.

These releases are splendid examples of how considered distillation and careful maturation can produce quite sublime results after a relatively short period of time. There is a very definite house style illustrated here, with two similar drams set apart by their delivery. It’s still early days for The Lakes Distillery, but these initial examples bode well for the future!

Thank you to The Lakes Distillery for providing samples.