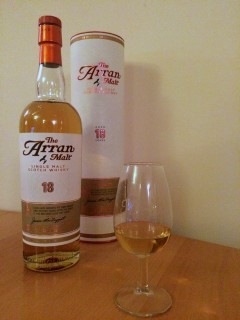 I recently had the pleasure of acquiring a bottle of Arran’s much-anticipated first  official 18 year old whisky.

Those with a mind for dates might recall that Arran Distillery opened in 1995, meaning that any casks laid down in the first year and bottled in the last would have already beat this bottling to the punch – and Master of Malt confirms that there are single cask offerings available at this ripe old age. However this is the first official distillery bottling to mark The Arran Malt’s coming of age, and it was met with such enthusiasm that the website’s online shop struggled to cope with the demand on the morning of its release!

It’s not clear in the picture, but if you look closely you might notice that the glass is an Arran glass – a memento of a tour of the distillery I took back in 2008! I have been a bit of a fan of their sweet, fruity, malty expressions ever since.

Sweet, rich dried fruit – sultanas, dried apricot. Slightly nutty, perhaps a hint of hazelnut. A pleasant drying sherry influence on the nose. Some stewed apple lingers in the background, accentuated with a drop of water. Strikes a wonderful balance of richness and freshness.

Sweet pastry alongside some warm spice and more rich fruit – apple pie! A slight marmalade tang appears with the addition of water.

Sweet, slightly nutty (reminiscent of some of the initial notes on the nose). Altogether delicious!