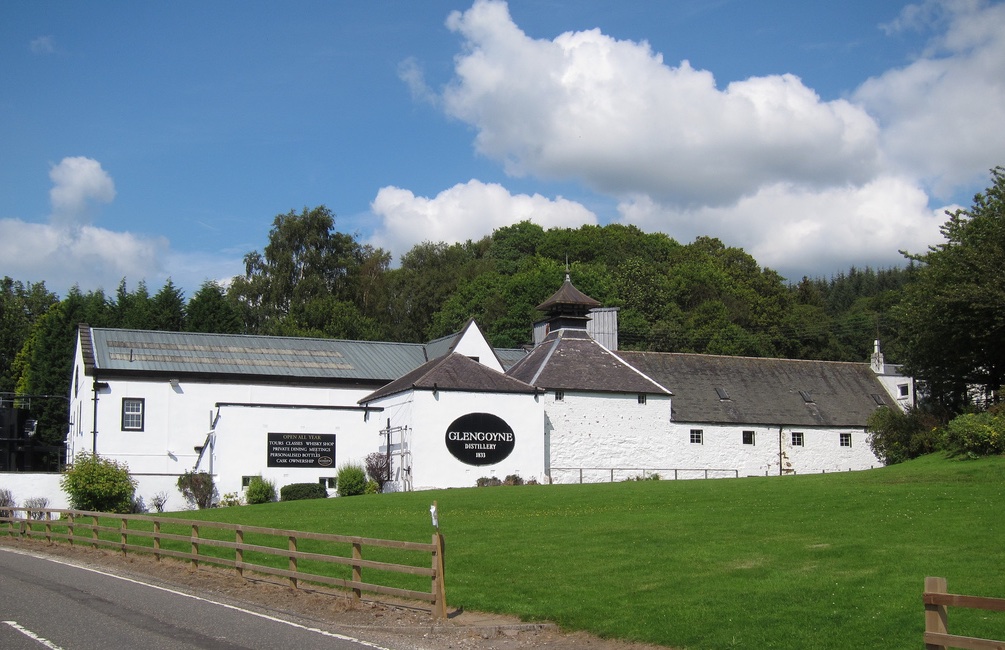 At just over half an hour’s drive from Glasgow, Glengoyne is one of the more accessible distilleries in Scotland – even those without a designated driver (or sample bottles) are well-catered for with a local bus service which stops right outside the distillery! A rather pretty location, Glengoyne sits almost on top of the Highland line (referring to the whisky boundary, the geological fault line lies a little further to the north) – technically the stillhouse is on the north side while the warehouse is on the south side, meaning Glengoyne is a Highland-distilled, Lowland-matured whisky.

Being so close to Glasgow – and a stone’s throw from the start of the West Highland Way – Glengoyne is a popular destination for casual visitors as well as seasoned whisky-enthusiasts, thankfully a wide range of tour options ensure there is something for everyone. From the usual basic tour, there are then chocolate pairing tastings, a single cask tasting tour and a fantastic blending tour which includes the opportunity to create your own single malt from a range of diverse single casks. A common theme on all of these tours is the influence of wood, specifically how the variables of a cask can influence the base spirit in a myriad of different ways.

Whisky is much more than cask influence of course (despite what some will claim!) and it is good to see that a tour of Glengoyne emphasises this: much is made of the slow spirit distillation; at around 4-5 litres per minute it is claimed to be the slowest rate in Scotland. For reference a typical distillation rate would be around 3 times the volume. This has a marked influence in the resulting whisky: removal of heavier compounds and increased copper contact result in a clean, light and fruity spirit. In the past I imagine that a tour would also have highlighted the distillery’s continued use of the revered flavourful Golden Promise barley variety, although in recent years Glengoyne have succumbed to the market and now use the higher-yielding Concerto.

Each tour ends the “process” section with a visit to the visitor’s area of The No.1 Warehouse; a building on the tour-friendly side of the road (rather than over with the rest of the warehousing down in the lowlands) with a small duty-free warehouse containing a few notable casks. A very well put together exhibit displays the differences between American and European oak, various cask sizes in common use, and features an impressive visualisation of the effect of maturation in different cask types on colour attained and evaporation loss (the angels are fans of European oak in particular!).

This sets the scene nicely for the pinnacle of the Malt Master Tour: we are taken into the Sample Room in the old manager’s house where we are greeted by a back wall filled with cask samples and a table, each place set with several whisky-filled carafes and various blending paraphernalia. Each carafe contains a sample from a particular type of cask to showcase the variety used at Glengoyne. On the day this consisted of:

After spending some time nosing and sampling each cask individually and taking in the different character lended by each, the goal is to create a single malt utilising multiple whiskies in specific quantities to yield a desirable flavour profile. The primary purpose is to demonstrate the influence of cask as asserted in the No.1 Warehouse, yet a strong secondary lesson for me was just how difficult the blender’s job is: attaining a specific character requires very small and careful additions of the more dominant whiskies, and whiskies of different character can react in unexpected ways! I personally found the European oak tricky to work with: I wanted some of the old leather and polished oak notes to come through towards the finish, but it was difficult to tease this out without dominating the dram entirely.

This was a very enjoyable tour which I would heartily recommend to seasoned enthusiasts as well as the more casual whisky tourist: far from going through the motions like many distillery tours unfortunately do, the people at Glengoyne take the opportunity to point out where their process deviates from the norm and appear keen to educate rather than spin tired yarns about romantic-but-questionable provenance. Well done Ian Macleod Distillers!